India - could it achieve similar nuclear power growth to China? 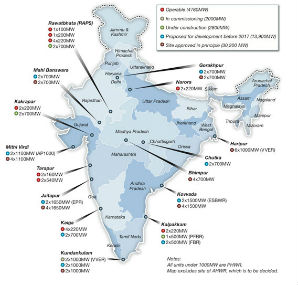 As economic growth in China has slowed sharply and the population begun to stabilise, India is now attracting a significant amount of attention. Its likely dependence on fossil fuels became a focus at the COP21 climate change discussions in Paris in December. This prompts the question as to how much nuclear power will grow in India. By Steve Kidd

A good starting point is the recently released 2015 edition of the International Energy Agency's (IEA) World Energy Outlook where India is the subject of an in-depth country focus.

The report claims that India will contribute the single largest share of growth (around one-quarter) in global energy demand in the period to 2040. The IEA is uncertain over the pace at which new large hydroelectric dams or nuclear plants can be built, so there is a strong reliance on solar and wind power to deliver on its pledge to have a 40% share of non-fossil fuel capacity in the power sector by 2030.

India maintains a strong commitment to develop additional nuclear power as a way to meet its rising energy needs and enhance its energy security on a low-carbon basis.

Nuclear power appears to be an economically attractive option in India. This is similar to the situation in China and is also particularly so in parts of the country distant from major coal reserves. But one vital issue is that public concerns are also likely to exert a powerful influence on the prospects for nuclear power in India.

On a worldwide basis, the IEA says India will have the second most significant increase in installed nuclear capacity after China. But it is well below. It therefore seems highly unlikely that India will replicate China's expansion in nuclear, at least in the period to 2040.

The full version of this article will be published in the January issue of Nuclear Engineering International, out soon for subscribers