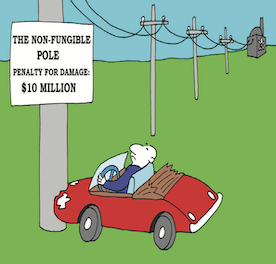 The vision of blockchain as the route to a distributed low energy utopia has not delivered, argues Jeremy Gordon. Instead it points to an always-on, high-energy-demand future, favouring a power system of abundance driven by clean nuclear power.

SOME SAW IT AS THE perfect way to decarbonise and democratise energy: let everyone generate distributed electricity from and record every kWh on a permanent public blockchain. Everyone would buy and sell electricity using the same system, trading with each other minute to minute, enabled by mobile internet and regulated by smart grids. Blockchain promised that this system would be publicly accessible, yet people could be anonymous if they wanted, and it would still be secure enough to pay everyone what they were owed automatically.

In simple terms it would enable you to use rooftop solar to charge up your electric car during the weekend and then sell the electricity to your employer from the car park on a Monday. The big picture would be one where every individual and every company would be doing things like that all the time and the system would somehow resolve it all in real time.

It was an attractive vision of a circular economy where technology would blend energy and money into a utopian low-energy lifestyle. But there was a problem hidden deep in the mathematics, and now blockchain technology is driving us in the other direction, towards uses that could only be tolerated in a society of energy abundance, not of streamlined efficiency.

You see, a blockchain is only a data structure for record keeping. Anybody can set one up and anyone can use one, but if it is going to publicly register anything of value then the controller of the data has to be highly trusted. That’s okay if the controller will be an organisation trustworthy and skilful with technology, but having any central organisation would reduce the openness of the system.

The more realistic alternative is to use the self-securing versions of blockchain, in which the blocks are tied together by mathematical puzzles in a way that is easy to verify but can’t be easily faked. This needs banks of computers to be running all the time to solve the puzzles, while they also conduct the transactions and mutually verify the data structure.

The most famous example is Bitcoin, which in a strange way actually converts the cost of electricity consumption into a monetary asset that comes with the by-product of uncrackable cryptographic security. This is really clever, and it works great until you have a value of $1 trillion recorded on your blockchain. At that point the computer power maintaining the system and its security demands more electricity than Argentina.

It gets worse, because not only will this demand for computing power continue to increase, but while there is significant value in the blockchain I presume the computers will not be switched off – ever. Who said baseload was dead?

Obviously a blockchain rooted in massive, ever-increasing power consumption would not be a very a good foundation on which to build a clean energy future. Unfortunately, for the nascent digital democracy industry nobody has yet figured out a practical alternative. This is the major reason that talk about the clean energy blockchain went quiet after a couple of years of headlines.

So far, so disappointing, but stay with me because it gets worse still.

While Bitcoin is the most famous blockchain application in the world, there are plenty of other cryptocurrencies also growing their energy consumption on a permanent basis. One of the main ones is Ethereum, which has increased in value more than 240% since the start of the year. This is partly due to the latest innovation on what can be stored in its secure system.

As well as ownership of currency, Ethereum can now record ownership of digital assets in what are called non-fungible tokens (NFT). (Non-fungible because each is unique, unlike the tokens for digital ‘coins’ which are necessarily all the same.) It means you can now ‘own’ the ‘original’ copy of a digital photograph, drawing, song or movie, or indeed anything else that that was created using a computer.

NFTs came along in 2017 but in March for the first time a major auction house (Christies), sold a digital artwork on that basis. It was a collage of digital images made over a 14-year period by the artist Beeple and he scooped an incredible $69.3 million for what had previously been posted online for free. To quote Beeple’s tweet, ‘holy f–––’.

A new cottage industry sprung up instantly in the wake of Beeple’s sale with people adding all kinds of digital ephemera – much of it on the wrong side of copyright – to the Ethereum blockchain hoping to score some quick digital cash. Every item listed requires the ‘minting’ of a new NFT, and therefore energy consumption. It has been estimated that the whole process could use 340 kWh – which is like running a microwave for more than two weeks just to create the equivalent of an ownership certificate.

Far from recording the minute-to-minute data of a power system in an idyllic distributed clean energy future, blockchain’s big contribution so far has been to promote energy consumption in the process of turning it into intangible value.

There are more practical applications of NFTs as well, such as ‘smart contracts’. They see the logic of a contract encoded into an NFT where it waits to be executed automatically and anonymously. The applications range from insurance contracts to...organised crime.

Is it acceptable that the paperwork for your travel insurance resides in a system of continuous energy consumption from that point on, forever? It’s arguable that every digital record requires some energy consumption and insurance companies also have huge computer systems that run continuously. But the difference in scale is enormous. The Ethereum blockchain only needs 107 GB of storage, so could be copied onto a USB drive, yet maintaining it for public use requires an estimated 7.75TWh per year – the output of a 950MWe power plant. This is out of whack.

At present, crypto is horrendous from a decarbonisation point of view and even raises ethical questions on the level of long-lived radioactive waste. By placing value in these blockchains we are obliging future generations to maintain them using ever-increasing resources, even as the natural carrying capacity of the Earth is shrinking. And of course NFTs, Bitcoin and other obscure financial products are owned by the wealthiest people, whereas the impacts of their energy use will surely fall on the poorest. This is not okay. Can it be stopped?

Banks tried to stop Bitcoin when they recognised a competitor. They failed and now they are building their own products based on NFTs. Democratic governments have no chance of making policy to curb cryptocurrencies, given the amounts of money involved. And things are not often un-invented.

At the same time, we do not normally try to ration energy so it is only for applications that are deemed to be socially useful. The closest things would be the ‘polluter pays’ principle and consumption taxes to discourage waste, but national efforts are of limited use in reining in a crypto industry that can relocate to wherever electricity is cheapest.

Like it or not, we have to recognise that public blockchains are here to stay and their immense energy use is a permanent baseload addition to our increasingly digital world.

The vision of blockchain as a route to a low-energy localist utopia seems dead. It now points towards an always-on high-energy future where the infrastructure is as anarchic and innovative as its uses, good and bad.

The only answer is to push for a power system of abundance that matches the digital world’s always-on demands while eliminating the pollution and social inequity of the fossil fuels. This uncontrollable and anarchic driver of energy demand can find its match in nuclear power, as an energy source that is steady, controlled, fully responsible for its wastes and impacts and, above all, clean. The confusing new world of crypto should only give the nuclear sector more reason to succeed and more confidence in its vision of energy abundance.