East Asia - what are the special features of nuclear there? 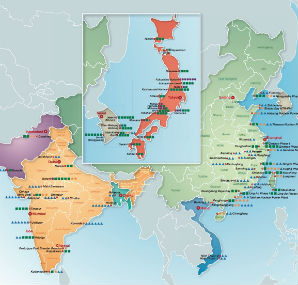 In the August issue of Nuclear Engineering International Steve Kidd will look at the common features of the nuclear industries in East Asia.

It is well known that today the centre of gravity of the nuclear world has moved from the western world to East Asia. Of the 66 reactors currently under construction worldwide, 33 are located in China, Japan, South Korea and on Taiwan.

One obvious feature that Japan, South Korea and Taiwan have in common is weak domestic energy resources and dependence on imports. Nuclear power has therefore offered an enhanced degree of energy security to these countries. China, however, is in a rather different position regarding energy resources.

An important feature of all four East Asian nations that encourages the use of nuclear is the high density of population living in urban areas. Another common feature supporting its development has been the rapid economic growth rates achieved.

The extent to which the state has directed economic activity through effective planning has been important, as has been their ability to carry out large sale construction projects successfully.

In other areas, there is nothing particularly special in the East Asian experience. Each of the countries is taking its environmental and climate change commitments seriously, but these are unlikely to be major drivers of the push for more nuclear. It is also interesting to note the rather different corporate structures that have been adopted in the East Asian countries, all of which have supported nuclear growth.

There are therefore some features that the East Asian countries have in common which are very relevant to their continued interest in nuclear but others in which they are not so different to the remainder of the world.

The full version of this article will be published in the August issue of Nuclear Engineering International, coming soon.