Blown away by the competition 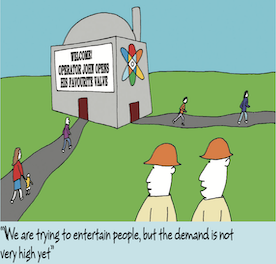 THEY MADE A DESTINATION OUT of a desert — and people love it.

I’m not talking about Las Vegas or the latest seven-star resort in Dubai, but the windswept semi-barren Eaglesham Moor in Scotland. This is a place around 25km outside Glasgow that hosts Whitelee wind farm. It was voted ‘The UK’s favourite wind farm’ in a contest run by the trade association Renewable UK. Whitelee also claims to be the most Instagrammed wind farm in the world: people have posted more than 13,000 pictures of their visits on the social media site to date.

Why is this place so popular, and how on earth can the British public have a ‘favourite wind farm’? The answer is surprisingly simple. Since its first turbines came online in 2009 its owner, Scottish Power Renewables, has invested in facilities and relationships to develop Whitelee into a leading tourist attraction. Over the years, as the wind farm grew to 215 large turbines, 150km of pathways were laid between them for walkers, runners, cyclists and horse riders. On a typical year 200,000 people visit, and during Scotland’s COVID-19 restrictions the numbers have been considerably higher, with cars overflowing onto the verges of the nearby trunk road. People evidently love spending time among the giant wind turbines, taking in their scale and marvelling at their engineering.

But McQuade is too modest. Whitelee is much more than that. It has a visitors’ centre that attracts a further 80,000 people every year. From the beginning, Scottish Power struck an agreement with Glasgow Science Centre for it to manage and operate the visitors’ centre. It offers a full range of education programmes designed to support the Scottish government’s Curriculum for Excellence for all ages up to 16. All the content and exhibits link back in some way to wind energy, recycling and renewables and it is free for casual visitors.

At the weekend there are workshops and packages for school and adult groups to learn about astronomy and crafting, and there is even a wind tunnel for visitors to try their hand at making a wind turbine of their own. As well as the science centre, Whitelee also secured sponsorship from the Scottish Government, the European Agricultural Trust for Rural Development and three regional councils to develop the trails and picnic areas.

Notwithstanding all these attractions, the wind farm remains a very challenging place. The website warns visitors to stay on the marked paths and avoid the areas between turbines for fear of bogs and hidden ditches. Visitors have to be wary of potentially rapid changes in weather conditions and are told not to enter the site in adverse conditions. They should wear serious weatherproof clothing and sturdy footwear, carry a compass as well as a torch and warn a relative to raise the alarm if they don’t make it back. I suppose it is extremely windy as well.

The moor has large barren areas which the environmentalist George Monbiot might describe as ‘sheep wrecked’ because they roam freely and eat everything, although some areas have scrub and there are areas of fir trees. There’s also open water in small lakes, which contribute to some of the treacherous boggy terrain. While Scottish Power has made efforts to remove non-native species and encourage a wide range of birds to live there, I think the turbines must mean there is no chance for the golden eagles that gave Eaglesham Moor its name making a comeback, although they do live in national parks about 50km away. Call me a city boy but it is clear that a visit to Whitelee is not for everyone, despite the visitor numbers.

I don’t point this out to denigrate this place, or the years of work that has gone into building Whitelee up as an attraction, which actually make me very jealous. But to be clear: the place itself can be objectively quite forbidding. This really goes to underline the success that Whitelee’s public relations managers have achieved. It also shows very clearly that ordinary people are curious about industrial facilities and will take the opportunity to visit them if they are made welcome.

According to the received wisdom of public engagement, when people are made welcome it follows that they will be trusting enough to learn something from their visit. They will be told that Whitelee produces 539MWe, which is enough for 350,000 homes, and that wind power and other renewables have the potential to power most of the world in future. And if they learn through experience – by feeling the raw power of Eaglesham Moor’s bracing wind for themselves – they will retain much more of what they learned. They will marvel at the scale of engineering that has turned a challenging landscape into a useful power plant.

After an exhilarating learning experience, people need some time to process it and transfer new information from working memory to long term memory. They do that by memorialising the event with gifts, by taking selfies, and telling other people on social media. It is from this instinct that Britain came to have a ‘favourite wind farm’.

Of course, a wind farm has the advantage of being in open land and visible for miles, and Whitelee is only 20 minutes by car from the centre of Glasgow. Convenience obviously helps, but a difficult location didn’t stop Sellafield Visitor’s Centre from pulling in 100,000 visitors a year through the late 1980s and 1990s, after a concerted effort to improve the site’s image was launched by the formerly centralised UK industry. It’s really about commitment and whether an industry truly wants, or needs, the public to understand more about what it is doing.

There is nothing stopping nuclear energy organisations from setting up public-facing sites in accessible city locations. This is exactly what Russia’s non-profit Energy of The Future has been doing since 2008 in regional cities as well as the capitals of six countries Rosatom is exporting to. Each of these centres draws in up to 20,000 people per year, which is about the same as on-site visitors centres in most countries. That Whitelee on its own welcomes 15 times that number shows how much investment the nuclear sector still needs to make, as much as it does the success of that single facility. Nevertheless, city centre engagement is clearly one route open to the industry to double its public interaction, if it wants to. To have a ground-floor office in central London with a welcoming reception area was always my dream for the World Nuclear Association when I worked there.

The owners of Paks nuclear power plant were conscious that not everyone would be able to visit the plant and so decided to create an exhibition that would reach every town in Hungary with a population greater than 10,000 population. The mobile exhibition they created using a large truck exceeded that mission and continues to this day.

Taking things further, the Korean Radioactive Waste Management Agency invested in an exhibition hall and theatre at its disposal site in Gyeongju and uses it to host all sorts of events, up to and including the national breakdancing championship. The sky is the limit if you engage the public on their terms rather than your own.

Must the nuclear industry copy what renewables are doing? Of course not, but it would be strange for an industry devoted to learning from experience to ignore the best-in-class examples from parallel industries. It is probably not possible for the nuclear industry to come up with exhibits that would rival the sensory experience of a wind farm visit. Instead, the main challenge for the industry might be first to actually recognise the value of widening public understanding, support and excitement about what it does.