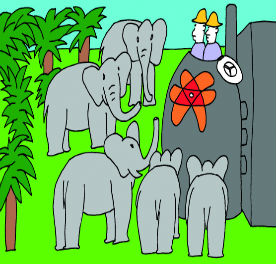 Nuclear power is already helping to reduce the burden we place on the planet. But future technologies could offer even greater potential not just for decarbonisation, but also for preserving nature, says Jeremy Gordon.

Humpback whales regularly breach in the Pacific Ocean near to California’s Diablo Canyon nuclear power plant. What could be a better view of high technology in harmony with nature? An area free from undue human pressure, in which large animals can live.

This is the kind of wild space we should aspire to have as the overgrown back garden of the clean, bright and efficient and modern built environments in which the majority of the Earth’s billions of people will live through this century.

A key feature of our urban lifestyle will be self- organisation between citizens to take action on issues that matter to them at local, regional, national and international levels, and to share resources. Many people will work alone or decentralised teams, empowered by seamless technologies, augmented by AI tools, with their creativity boosted by the personal freedom they enjoy. Advances in translation will enable true global collaboration.

There will be constant consciousness of the need to protect natural resources from exploitation and in particular to preserve the air and climate. The earth shouldn’t be forced to absorb much more heat. Global average temperatures are already more than 1 degree C above the pre-industrial levels, and by mid-century it will probably be past 1.5 degrees C. If you consider the sheer size of the Earth’s surface, atmosphere and oceans, that is a phenomenal amount of energy that will be manifesting in our weather. A clear need for change from today’s business as usual is seeping into people’s consciousness. Surveys show they are increasingly ready to take controversial positions and to try new things — in one poll a global majority agreed 51% to 44% with the statement ‘I sometimes like to speak or behave in a way that shocks people’.

It’s hard to know to what extent this disruptive future will be citizen-led, or will be fixed by national controls, or, most likely, what will be tensions between the two in each jurisdiction. Either way, achieving a healthy version of this dynamic future will need a whole range of technologies to come together within clear frameworks set by governments, which themselves must change to accommodate vastly more powerful bottom-up input from self-organised citizens. There will be a patchwork of methods in which there is always more than one way to complete a task, make a journey or forge a career. No aspect of life will be dominated by a winner — that is, apart from the continuous learning and reinvention that workers will have to practice.

The picture I’ve painted is broadly in line with what Ecomodernists envisage in their manifesto: a ‘good Anthropocene’ in which “humans use their growing social, economic, and technological powers to make life better for people, stabilize the climate, and protect the natural world.”

Like the Ecomodernists, readers of this magazine will expect nuclear energy to play a role in this mid-21st century world. The extreme energy density and resource efficiency of nuclear power certainly go a long way already to preserve land and nature and thereby reduce the burden we place on the planet. However, it will be difficult for infrastructure already in place to keep up with changing social values, structure and ways of working.

Future nuclear technology, such as the small modular reactors (SMRs) we hope will reach the market soon, will be more able to fit into a diversified and decentralised world. Nuclear’s potential to supply heat in addition to electricity may be particularly important if it is to be a team player. Future nuclear reactors could supply heat to industry and homes up to 20km away and this opens the possibility for nuclear energy to contribute directly to hydrogen and synthetic fuel production and take a role in decarbonising challenging applications like aviation. Incoming advanced reactor designs also offer significantly better safety profiles, so they have more siting options including off-grid situations and co-location with demand.

With the Akademik Lomonosov, small reactors have begun to serve remote communities and this usage stands to expand, while advanced nuclear reactors would also be capable of establishing entirely new communities and unlocking lucrative development in remote areas. These are very exciting opportunities, which we should ensure go towards improving lives and preserving nature at least as much as they go towards resource extraction.

While concrete and steel cannot change much over time, human attitudes and organisations can. And like anything else in nuclear, perceptions will be almost as important as reality. The wild, natural and creative imagery I presented inspires positive emotions which the industry will need to align with as we go through this transformation together. It is worth thinking on the alignments nuclear energy can make to position itself early for the dynamic future where it should be an integrated and valued team player and seen as such.

Developed economies are already moving from scarcity of goods and services to scarcity of jobs — we are all rich, by material standards from just a couple of decades ago, yet job security is falling all the time and is non-existent for more and more people. Meanwhile, it remains to be seen how AI tools and robotics will affect the workforce. Some current jobs will certainly disappear, while others will be created, but will there be as many and will they be as fulfilling or well compensated? That would be a surprising result for capitalism to produce. It is more likely for them to diverge: some being very basic and hands-on, while others would be highly specialised and probably able to be done from anywhere in the world.

While most employers will be offloading responsibilities to workers and then offloading the workers themselves, nuclear firms will need to do the opposite — because celebrating and leaving space for nature means we should celebrate and leave space for people too. So nuclear organisations need to prioritise the wellbeing and freedom of their staff, including the footloose contractors who may be working from anywhere. Diversity should be integral. A recent report by EqualEngineers on masculinity in engineering concluded that a significant number of male engineers in the UK and Ireland felt threatened by diversity and inclusion measures to improve conditions for others. But a similar number of them were unhappy in the male dominated environment: 18% had lost a colleague to suicide, while 22% had thought about self-harm or suicide themselves. An obvious conclusion is that the current system isn’t healthy for anyone: let’s change it.

Creativity comes from combining interesting and inspirational elements from different aspects of life. It grows with the freedom to engage in personal projects or to spend time on one’s interests. More freedom for workers will result in more experience, inspiration and creativity, which should be nurtured. As well as potentially bringing breakthroughs on industry problems, creativity in the workplace is also fun and makes people happy. As society overall ramps up its creativity it is important that the nuclear industry catches up and joins the trend. Of course there is not that much room for grand creativity on a power plant site, but where the industry cannot be creative itself it must partner with creative people from outside.

In parallel, the industry needs to reboot its use of icons. It is blessed with some real classics: for example, Albert Einstein and the atom, which have symbolised pure genius for around 100 years. We think of them as a bit old and stale, although that didn’t stop Apple from using the atom for its Genius Bar, or stop IBM adapting it for its Watson AI products. Nuclear icons could make a comeback, and there is always the possibility of developing something new and in line with nature. What creatures share the attributes of nuclear energy, being small, powerful, accurate, and persistent which could serve as a mascot? Answers on a postcard, please.

None of these would amount to anything without continuous investment in their expression. If people of the mid century are to look kindly on nuclear energy and consider it deserving of a presence in their world, they need to see parallels between their goals and the realities of a typical nuclear facility and a typical nuclear worker’s lifestyle.

Through top-down populism and bottom-up organisation, people are having an increasing influence on policy. Either way, the people of the nuclear business need to be involved, visibly successful and contributing actively to the solutions.

Cartoon by Alexey Koveynev: "Remember when nuclear was the elephant in the room?”