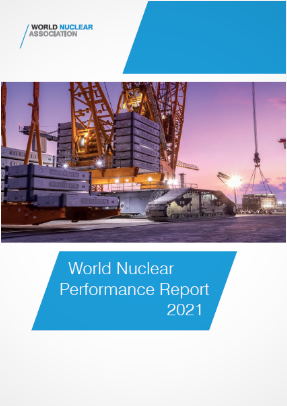 Nuclear reactors generated a total 2553TWh of electricity in 2020, down from 2657TWh in 2019, according to the latest World Nuclear Performance Report released by the World Nuclear Association (WNA). Despite the small decline, WNA Director General, Sama Bilbao y León, said "the resilience and flexibility shown by the global nuclear fleet tell a very positive story."

The decrease in nuclear output was strongly influenced by the overall fall of around 1% in global electricity demand in 2020 caused by the COVID-19 pandemic, the report says. In addition, nuclear reactors were increasingly being called upon to provide load-following support to the growing share of variable renewable generation.

"In any other year an almost 4% decline in nuclear generation would be an unequivocal disappointment," Bilbao y León says in the preface to the new report. "In 2020 the world's nuclear reactors have shown resilience and flexibility, adapting to changes in demand while ensuring stable and reliable electricity supply."

The capacity factor for the global fleet in 2020 was still high at 80.3%, down from 83.1% in 2019, but maintained the high performance seen over the past 20 years. Nearly two-thirds of reactors had a capacity factor greater than 80% last year. "There is no age-related trend in nuclear reactor performance," the Association says. "The mean capacity factor for reactors over the last five years shows no significant overall variation with age. With some reactors now being licensed to operate for 80 years, the consistency in performance of reactors regardless of age is notable."

At the end of 2020 there were 441 operable nuclear reactors, with a combined capacity of 392GWe. This total capacity has remained almost unchanged for the last three years, with new capacity additions being matched by the amount of nuclear capacity being permanently shut down.

"With global electricity demand expected to rebound sharply, there is a real risk that greenhouse gas emissions will do so as well," Bilbao y León said. "More than half of the reactors permanently shut down in the last few years have done so not because of technical limitations, but because of political phase-out policies or the failure of markets to adequately recognise the value of low-carbon reliable nuclear power. This is a loss of low-carbon generation that the world can ill afford to squander."

However, there are promising signs for nuclear, WNA noted. Already in 2021, four new reactors have been connected to the grid and construction has started on seven reactors, although two reactors have permanently shutdown. Bilbao y León said: "It is vital that nuclear generation bounces back further and faster, helping displace fossil fuels, thus avoiding a sharp rise in greenhouse gas emissions. The operation of the existing nuclear fleet must be maximised and extended as long as feasible, and the pace and scale of new nuclear construction must increase."

Construction started last year of four new reactors with a combined capacity of 4473MWe (net). Three of these are in China (Sanao 1, Taipingling 2 and Zhangzhou 2) and one in Turkey (Akkuyu 2). The median time for construction of reactors grid connected in 2020 was 84 months, down from 117 months in 2019.

It also presents four case studies highlighting the contribution nuclear energy makes to greenhouse gas emissions reduction. These case studies include: the Grohnde nuclear power plant in Germany, which has produced 400TWh of low-carbon electricity; the Haiyang plant in China, which is providing district heating; the Akkuyu plant, the first to be built in Turkey; and Peach Bottom
Post to: