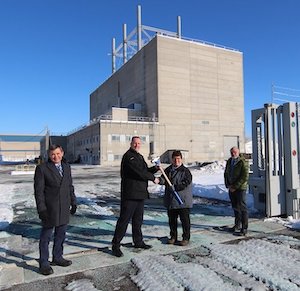 The US Department of Energy (DOE) Office of Environmental Management (EM) announced that it was set to deactivate and demolish the prototype for a reactor plant used for the first nuclear-powered submarine, a major step toward advancing environmental clean-up at the DOE Idaho National Laboratory (INL) Site.

The Submarine 1st Generation Westinghouse (S1W) prototype, a land-based reactor, was built inside a section of a submarine hull at the Naval Reactors Facility (NRF) on the Arco Desert west of Idaho Falls. NRF is under the cognisance of the Office of Naval Reactors (NR), which entered into an agreement with EM to carry out the S1W facility demolition and other deactivation and decommissioning (D&D) efforts.

“This project is the first in a partnership between EM and Naval Reactors at the INL Site,” said Connie Flohr, manager of the Idaho Clean-up Project for EM. “It allows NR to utilise EM expertise to remediate NR environmental liabilities such as unused infrastructure and excess facilities across the complex, the first of these being the reactor prototype and ancillary support structures.”

The S1W prototype supported development of the USS Nautilus, which was launched in 1954 as the world's first operational nuclear-powered submarine. Because nuclear propulsion allowed it to remain submerged far longer than diesel-electric submarines, the Nautilus broke many records in its first years of operation and traveled to locations previously beyond the limits of submarines. The prototype also was used to train naval officers and enlisted personnel to operate the propulsion plants of nuclear-powered submarines and aircraft carriers, and to test nuclear propulsion technology. The S1W prototype was shut down in 1989.

A ceremony commemorating transfer of the defueled reactor plant to EM was on 27 January at the NRF. “Naval Reactors entered into this agreement because DOE-EM has established expertise in large-scale D&D across the DOE laboratory complex,” said Mike Huth, manager of the Naval Reactors Idaho Branch Office. “We look forward to working with EM in the years to come.”

Crews are scheduled to begin demolishing adjacent S1W support buildings later in February. Activities to prepare for deactivation of the reactor plant, including asbestos removal and characterisation of other building components to confirm facility contents and any associated risks, will also start this month. Actual D&D of S1W is expected to begin in fiscal year 2023. An engineering evaluation and cost analysis to evaluate alternatives for deactivating and decommissioning the S1W prototype will be released for public comment.

Preparations to hand the facility over to EM began in 2020. That work included preparing the facility for “cold, dark and dry” status, in which all potential hazardous energy sources are disconnected, and also working with the Idaho State Preservation Office and other stakeholders to ensure removal of historic property in accordance with the National Historic Preservation Act.

Photo: Officials from the US Department of Energy Office of Environmental Management (EM) and the Office of Naval Reactors (NR) mark the transfer of the S1W prototype facility from NR to EM (Credit: DOE)