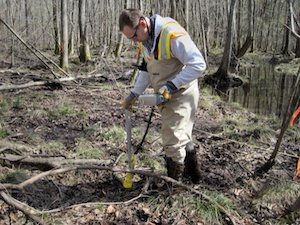 The US Department of Energy’s (DOE’s) Office of Environmental Management (EM) and its clean-up contractor at the Savannah River Site (SRS) have reached an important record of decision (ROD) agreement with South Carolina and federal environmental regulators on the final clean-up of a 25-mile-long stream corridor at the site.

The corridor consists of Par Pond, nine miles of canals adjacent to the pond and a stream named Lower Three Runs. The stream begins near the centre of the site, just above Par Pond, and winds its way southward across SRS.

SRS, a 310-square-mile-site in Aiken, South Carolina, focused on the production of plutonium and tritium for use in the manufacture of nuclear weapons from its inception in the early 1950s until the end of the Cold War. In 1992, the focus turned to environmental clean-up, nuclear materials management, and research and development activities.

The ROD agreement specifies what protective and clean-up actions are required, along with assurances of long-term monitoring to ensure the corridor remains within environmentally safe standards. It acknowledges the successful completion of a comprehensive clean-up strategy following the decommissioning and closure of both P and R areas at the site. Operations involving P and R reactor facilities had contributed to the contamination of the Lower Three Runs stream corridor.

“This is the first record of decision that we’ve ever agreed upon with the regulators and the public that outlines the final closure for a large parcel of stream systems,” said Chris Bergren, director of environmental clean-up and area closure projects for Savannah River Nuclear Solutions (SRNS), a site clean-up contractor. “We’ve accomplished much of the clean-up related to this part of the site over the years, and now we have determined the remaining actions necessary to achieve final clean-up.”

SRNS Engineer and Project Technical Lead Jim Kupar explained that much of the remaining work involves ensuring additional fencing and signage are in place to warn site workers and the public that potential hazards may be present. “Though it is illegal for the public to cross the fencing onto SRS, our first priority is always their safety,” he said.

He added that surveying 25 miles of waterways, especially Lower Three Runs, was often challenging and sometimes potentially hazardous within the forest.

“We used aerial detection equipment along with taking onsite readings every 1000 metres along Lower Three Runs, often involving difficult terrain,” he said. “Tripping hazards, feral hogs, snakes, spiders and bees could appear at any time. Though the survey is complete and active controls are now in place, we continue to conduct inspections along the stream corridor.”

Bergren said that everything from characterisation of potential contamination through final negotiations with regulators was important to reach the record of decision. "It’s a big deal," he noted. "We want to be sure that the public is confident that we’ve fully taken care of the Cold War legacy issue.”

DOE-Savannah River Deputy Site Manager Thomas Johnson Jr said the clean-up of surface water and groundwater at SRS is one of the site's most important missions. “The list of significant environmental remediation achievements at SRS, over just the last 10 years alone, is long and impressive," Johnson said. "It serves as a testament to the effectiveness of our relationship with regulators and our mutual commitment to continuous improvement and safety.”