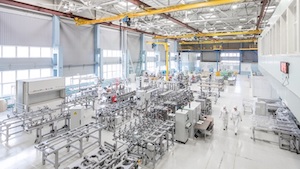 The products were accepted by the customer and shipped to China on 23 December for testing the simulation zone of the reactor — before the launch of a new power unit, dummies of fuel cartridges (simulators), as well as assemblies of the control and protection system, are first loaded and unloaded into the reactor core to test the operation of key systems of the reactor plant.

TVEL and the Chinese company CNLY (part of China National Nuclear Corporation) signed a contract for the supply of nuclear fuel for the CFR-600 reactor at the end of December 2018. To fulfil the contract, MSZ upgraded the production of fuel for "fast" reactors; in 2021, and a new production site (pictured) was commissioned for the serial production of fuel assemblies for a Chinese-designed reactor.

“Rosatom is fully prepared to provide the CFR-600 with nuclear fuel. The serial production of fuel pellets has already begun. In 2022, MSZ will begin the regular production of CFR-600 fuel assemblies, as well as reactor control and protection assemblies for the first commercial delivery to China,” said Oleg Grigoriev, TVEL’s Senior Vice President for Commerce and International Business. “This project further strengthens the foundation for the development of Russian-Chinese cooperation in the nuclear fuel cycle.”

After the commissioning, the 600MWe CFR-600, it will become the only operating high-power fast reactor built outside of Russia. In addition, since 2010, an experimental Chinese fast neutron reactor CEFR with a capacity of 20MWe, located on the territory of the China Institute of Atomic Energy CIAE, has been operating on Russian nuclear fuel.

The Elemash shop floor where CFR-600 fuel is being manufactured was opened in 2021 (Photo: TVEL)