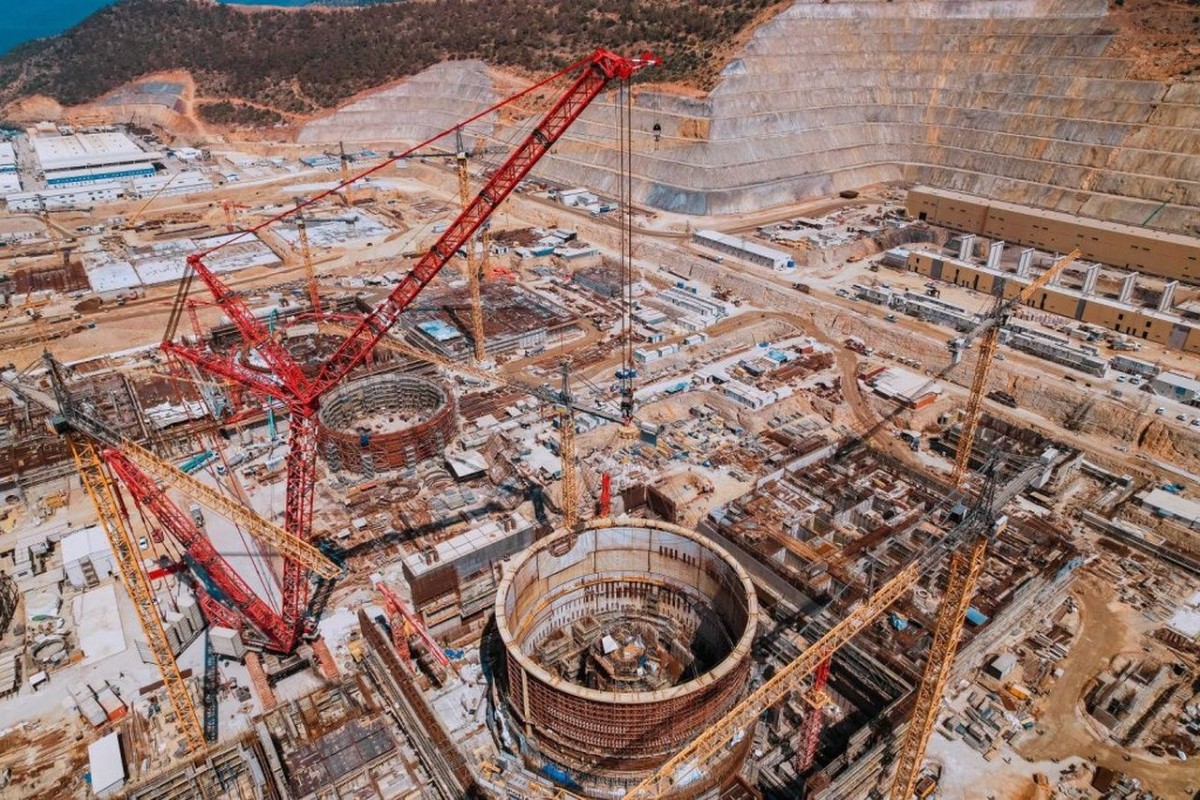 The Turkish Energy Ministry is seeking to resolve a dispute between the parties involved in the construction of the $20 billion Akkuyu NPP being built by Russia's Rosatom in southern Mersin province. Project company Akkuyu Nukleer, part of Rosatom, said on 30 July that it had signed an agreement with TSM Enerji to undertake the remaining construction work at the plant after terminating a deal with Turkish firm IC Içtas.

TSM is owned by three Russia-based companies, according to the Turkish trade registry. "All works under current subcontracts will be transferred to TSM ... Similar new contracts will be signed between TSM and subcontractors," Akkuyu Nukleer said in a statement, without explaining why the IC Içtas agreement had been terminated. However, it stated that the contracting companies taking part in the NPP project should have the "competence" to operate at an "intense pace". The statement said the contract with TSM would ensure work was completed by previously agreed dates and that workers were paid on time. According to Rosatom, the upcoming work requires "specialised skills in the construction of nuclear power plants to ensure high-quality work that meets the construction and installation deadlines”.

IC Içtas said on 1 August that it had launched a legal challenge to the termination. The company told Bloomberg, that it will be suing Rosatom before an arbitration tribunal in London and also intends to take appropriate legal action in Turkey. IC Içtas said 7,000 employees had been put on mandatory paid leave. According to a company statement, as a result of the termination, all works within the scope of the project were ordered to be stopped immediately, and the works in the project area came to a standstill.

Akkuyu Nükleer's actions were criticised by representatives of the Turkish opposition and in the Turkish media with accusations that Russia was taking control of the power plant. IC Içtas called the unilateral termination of the contract an "illegal act" and threatened to seek his rights in court. Its management accused Rosatom of trying to "reduce Turkish corporate presence" in the Akkuyu NPP project. The executives of the Turkish company believe that this could slow down the construction process because TSM does not have the capacity for it.

Yeni Akit cited Engineer Levent Senoglu, who works as the deputy production preparation director at Akkuyu NPP, as saying that 17,000-18,000 of more than 20,000 people working at the power plant are Turkish personnel. He noted that more than 10,000 employees had to leave work after the termination, some of whom were transferred to the new company. “It is very sad for the Akkuyu project to come to this point in this process where all the work has accelerated, the fourth unit had started and all the works have entered the final course. We are seriously concerned about both our rights and the future of the project,” he said.

The Turkish Minister of Energy and Natural Resources. Fatih Dönmez. said in a statement on 2 August: "Our ministry has taken the necessary initiatives to resolve the dispute between the parties. Our priority is to ensure that all contractors and employees who have been serving at the construction site since the beginning of the project do not suffer any grievances and that the project is put into service on time," it said.

He noted that the Akkuyu NPP is Turkey’s largest single investment to date, and that with the full capacity commissioning of its four 1200MWe reactors it will meet approximately 10% of Turkey's total electricity need.

It noted that “thousands of employees in the field are making a great effort to ensure that Turkey's largest project progresses in accordance with the targets”. The main goal is to commission the first reactor in 2023, “in line with the project schedule, with the supervision and approval of the Nuclear Regulatory Authority, with reference to international standards”.

Akkuyu, implemented with the highest safety standards, “not only provides nuclear technology transfer to our country, but also provides an important accumulation for the formation of a domestic and national nuclear energy industry,” the Minister added. “In this context, 317 students have been sent to Russia for nuclear energy training so far, to train our engineers who have the knowledge and experience to establish and operate Turkey's future nuclear power plants.” So far 263 engineers have completed their training and started to work in Akkuyu and 54 are continuing their education in Russia.

“The domestic supply of materials, equipment and services needed in the construction and operation of the Akkuyu Nuclear Power Plant is to create a business volume of approximately $6 billion. This situation will make significant contributions to the development of domestic technology and production capacities of nuclear energy and the sub-sectors that support it.”

However, Dönmez acknowledged that there were conflicts between Akkuyu NPP and the contractor Titan 2-IC Içtas consortium. “In this process, our Ministry has taken the necessary initiatives to resolve the conflict between the parties…. Our initiatives within this framework continue towards solving the problems. We would like to recall once again that the parties have a responsible and constructive task in such a project.”