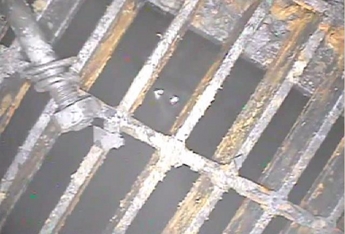 TEPCO has estimated that the water collected in the bottom of the unit 1 pressurised containment vessel is about 3m deep, following a new video and radiation survey through a pre-installed penetration.

The depth of the water is significant, because it demonstrates the extent of leaks in the bottom of the PCV. Five cubic metres of water per hour is being injected into the unit 1 reactor pressure vessel inside it. The long-term plan is to stop the leaks and flood the containment vessel with water.

Using a special punching machine, a 130mm-diameter hole was cut through three 25mm-thick lead stoppage plates blocking off PCV penetration X100B in late September. The penetration is located above the equipment hatch and about 9m above the bottom of the drywell. Video of the insides of the PCV shows the camera’s reflection off the accumulated water beneath a rusty grating, which was estimated to be about 1m above the surface of the water. Video was also taken beneath the grating, and in the water. (See links at bottom).

Radiation dose was found to decline as the probe was lowered, from a high of 9.8 Sv/hr at the level of the penetration to 4.7 Sv/hr just above the water’s surface. These readings make sense if the bulk of the fuel causing the radiation is held in the reactor pressure vessel, whose base appears to be located approximately at the level of the penetration. However, initial computer simulations based on delay of cooling water injection suggest that most of the reactor fuel drained out of the RPV and lies on the bottom of the PCV.

There are also plans to take samples of the PCV water, and install permanent equipment to measure ambient temperature, water temperature and water level.

In early October, TEPCO published English-language versions of its Fukushima Nuclear Accident Investigation report first published, in Japanese, in June. The report is the result of work of two committees, one of which is external. It had also published an interim report in December. TEPCO said that the full report contains additional information about emergency management, information disclosure, radiation control status and evaluation of radioactive material release not contained in the interim report. In the report, TEPCO concludes in very general terms, ‘we would have to say that the tsunami estimate of TEPCO was insufficient in the end, and the root cause of this accident was the inadequate preparedness for tsunami.’ It has published a summary version of the report (and the attachments (both less than 1 Mb), and the complete report (11 Mb), available to download from the attached TEPCO link.

In other news, TEPCO was allowed to resume clearing debris from around the unit 3 spent fuel pool after a steel beam slipped and fell into the water on 22 September, following a meeting of the new Japanese regulator, the Nuclear Regulation Agency.

A hydraulic grab attached to a remote-controlled crane, and two remote-controlled excavators, have been working to remove steel beams that supported the roof and walls of the upper structure of the unit 3 reactor building, which were damaged and collapsed by an explosion in March 2011.

The beam was discovered in the pool on 26 September. Radiation readings in the pool—about 2500 Bq/cm3 of caesium 134, and about 4000 Bq/cm3 of caesium 137—have not changed significantly since the beam fall, nor has atmospheric radiation levels, and TEPCO verified that the spent fuel alternative cooling system continued to function properly, and that there was no change in the skimmer surge pool water level, which is also used for the cooling system. Pictures taken by an underwater camera has not shown any problems with the upper part of the spent fuel and storage rack or pool wall, TEPCO said. A video of this work (pre-fall) is available.