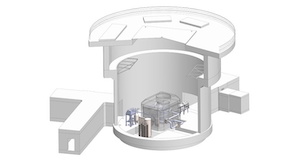 US Southern Company said on 18 November that it had established a cooperative agreement with the Department of Energy (DOE) to design, construct and operate the Molten Chloride Reactor Experiment. The small reactor experiment, selected for funding under DOE’s Advanced Reactor Demonstration Programme (ARDP), will advance US TerraPower’s Molten Chloride Fast Reactor (MCFR).

Southern Company research and development (R&D) will lead the effort in a collaboration that includes TerraPower, Idaho National Laboratory (INL), Core Power, Orano Federal Services, the Electric Power Research Institute (EPRI) and 3M Company. The team’s ongoing alliance with DOE’s Office of Nuclear Energy through the ARDP is essential for delivering this key technology and will be supported by a five-year, $170 million cost-shared funding agreement.

“Southern Company is committed to advancing next-generation nuclear as part of a comprehensive strategy to deliver clean, safe, reliable, affordable energy to the customers we’re privileged to serve,” said Dr Mark S Berry, Southern Company vice president for R&D. “The Molten Chloride Reactor Experiment will support the commercialisation of a revolutionary technology on a timescale that addresses climate change benchmarks and delivers on Southern Company’s goal of net-zero greenhouse gas emissions by 2050.”

The Molten Chloride Reactor Experiment will be the world’s first fast-spectrum, salt-fuelled nuclear fission reactor to go critical, said Southern. The project represents a significant inflection point in the technology demonstration road map for TerraPower’s MCFR, as the project will inform the design, licensing and operation of an MCFR demonstration reactor. An environmental review will be completed for the Molten Chloride Reactor Experiment in accordance with the National Environmental Policy Act before final design and construction begin.

The MCFR offers many performance and economic benefits including flexible, highly efficient clean electric power generation as a complement to the increased use of intermittent renewable resources on the grid, Southern noted. The technology also has the potential to provide carbon-free high-grade process heat and thermal storage for difficult-to-decarbonise industrial markets and ocean transportation sectors.

“Our past work with Southern Company has led to important experimental milestones and to the establishment of unique test facilities necessary to validate molten salt reactor technology,” said Chris Levesque, TerraPower’s president and CEO. “Southern Company’s leadership and experience in reactor licensing and operation has been essential. The Molten Chloride Reactor Experiment will continue this important work in a critical reactor experiment, leading to the successful development of low-cost, clean energy for the future.”

Through a public-private partnership in 2015, Southern Company and TerraPower were awarded approximately $40 million from DOE to build integrated infrastructure necessary to support early development of MCFR technology. The newly selected Molten Chloride Reactor Experiment will continue this momentum toward commercialisation of the MCFR.

The Molten Chloride Reactor Experiment is targeted for operation at INL. A project initiation ceremony was held on 20 October in Idaho Falls, attended by representatives from Southern Company, TerraPower, INL and DOE. During this event, INL Director John Wagner said, “The core of INL’s heritage is demonstrating nuclear reactors and this opportunity to bring the first-ever fast-spectrum molten salt reactor critical is remarkable and significant.”

Photo: A rendering of the MCRE (Photo credit: Southern Company)