Second tier of the internal containment installed at Akkuyu 2 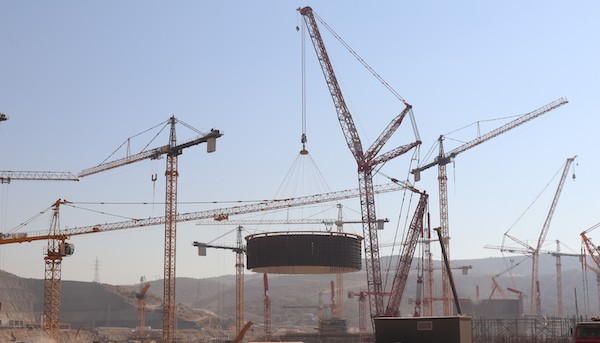 The second tier of the internal containment shell (ICS) has been installed at unit 2 of the Akkuyu NPP under construction in Turkey, Rosatom reported on 9 September. The ICS is one of the main safety elements providing protection for the reactor compartment. It is also a support for pipeline penetrations and a polar crane, with the help of which work is carried out to maintain the nuclear reactor one it is operating.

The VZO consists of a steel cladding, which ensures the tightness of the ICS compartment, and special concrete. The second tier of VZO is a welded metal structure, comprising 24 sections - two tiers of 12 sections each. Each sections weighs 5-7 tons and is six metres high. The sections are welded together and assembled into a single cylindrical structure equipped with fittings and embedded parts. The total weight of the structure is 321.9 tons, the height 12 metres, and the circumference is 138 metres.

Installation of the ICS tier is a complex and time-consuming technological operation. It took 12 hours to assemble using a Liebherr LR 13000 heavy crawler crane. After installation of the second tier, the height of the reactor building is increased by 12 metres to a height of 16.95 metres. Next, the builders must weld the first and second tiers together, and reinforce and concrete the shell. The thickness of the concrete walls of the cylindrical part of the ICS will be 1.2 metres. After completing the installation of all elements and concreting of the protective shell, it will be tested for tightness.

“Another important key event of 2021 has been completed - the second tier of the ICS of the reactor compartment of unit 2 has been installed in the design position,” said Sergei Butskikh, Rosatom First Deputy General Director and Director of NPPs construction.

“For several months, the specialists carried out the installation of the sections into a single structure and before starting its installation, all welded joints were checked for defects using ultrasound. The technology for the enlarged assembly of the tiers of the inner containment shell has proven itself well in the construction of the Leningrad-II NPP. Using this method, we installed the second and third tiers of the ICS at unit 1. The technology makes it possible to increase the accuracy of the assembly of structures and to optimise the construction time of power units, and also meets the principle of ensuring labour safety, since it involves a decrease in the number of assembly operations at height. In the reactor department of unit 2, work is currently underway to build the reactor shaft. The floors have been reinforced in the turbine building,” he added.

The inner containment sections were manufactured at a plant in the Leningrad region (Russia). Separate sections were delivered by sea from St Petersburg to the construction site of the Akkuyu NPP, where they were assembled into a single tier. The assembly of the sections of the second tier of the unit 2 ICS began in mid-April 2021. The reactor buildings of the Akkuyu NPP power units are equipped with a double containment shell. The outer containment shell is formed of reinforced concrete and is designed to withstand any extreme external influences - earthquakes up to 9 points, tsunamis, hurricanes, and any combination of these.

An intergovernmental agreement between Turkey and Russia on cooperation in the construction and operation the Akkuyu NPP in Mersin province was signed in  2010. Rosatom is building four VVER-1200 reactors at Akkuyu, under a build-own-operate model. Construction of the first unit began in 2018, with start-up planned for 2023. The 4800MWe plant when completed is expected to meet about 10% of Turkey's electricity needs.

Photo: The second tier of the internal containment shell (ICS) has been installed at Akkuyu 2 (Credit: Rosatom)