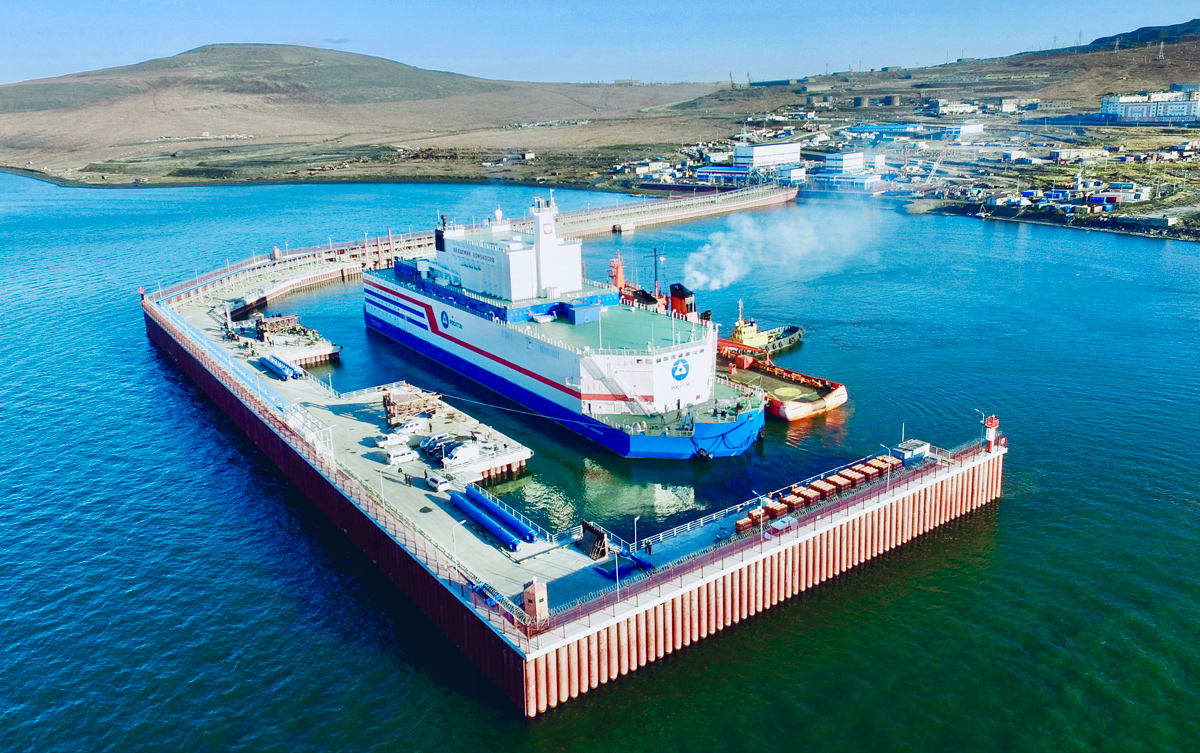 The first heat from the floating NPP (FNPP), Akademik Lomonosov, has recently been supplied to residential buildings in the second Geologist microdistrict in Pevek (Chukotka Autonomous Okrug), Russian nuclear utility Rosenergoatom has said. To date, the FNPP supplies Pevek with heat for almost three quarters of the entire housing stock. After a staged complex of commissioning of technological equipment, together with newly connected consumers, the plant will provide heat for the entire city.

“Today, the capacity of the FNPP is enough to provide the entire Pevek with a huge supply of heat. It is expected to completely supply all consumers in the city with heat and hot water from the FNPP by the end of August this year,” said Vitaly Trutnev, Deputy General Director and Director of Rosenergoatom’s branch for Floating Nuclear Thermal Power Plants.

The first heat from the FNPP in Pevek was supplied in June 2020, upon completion of the first stage of the municipal contract for the modernisation of engineering networks for heat, water supply and sanitation. This brough heating to the 5th microdistrict of Pevek, after which the city utilities began to modernise the remaining heating networks.

Works to replace the entire city heat supply system, from design, construction to commissioning of engineering networks, were carried out by Elkon MMC (part of ARMZ Uranium Holding Co within Rosatom’s Mining Division) under a municipal contract concluded with Pevek in 2019 Pevek.

Elkon General Director Vyacheslav Galaktionov said the work was financed from the federal budget within the framework of the state programme of the Chukotka Autonomous Okrug “Development of Housing and Communal Services and the Water Management Complex” and a number of other municipal programmes. “As a result, central water supply pipelines were replaced in the city and 77 individual heating points were equipped. Today, this allows all 57 apartment buildings in Pevek to receive hot water supply from the FNPP.”

Currently, the FNPP operates in cogeneration mode, producing both electricity and heat for the city. FNPP electricity generation in 2021 amounted to more than 175 GWh, aoiding greenhouse gas emissions of more than 80,000 tons of carbon dioxide equivalent.

Akademik Lomonosov FNPP, developed and constructed by Rosatom, was connected to the grid in December 2019, and at the end of May 2020 began commercial operation. The keel of Academik Lomonosov was laid in 2007 at Sevmash in Severodvinsk, but in August 2008 Rosatom transferred the contract to the Baltic Shipyard in St Petersburg, where the 21,500t hull was launched at the end of June 2010.After the two reactors were installed in October 2013,

Academik Lomonosov in April 2018 on the first leg of its journey to Murmansk where it was loaded with fuel and took on board its crew.

In June 2019, Rostekhnadzor issued a 10-year licence to Rosenergoatom to operate the Akademik Lomonosov until 2029. A dedicated system of coastal infrastructure supports the FNPP, which is equipped with two KLT-40S reactors with an electric power of 35MW each. The power capacity of the FNPP is 70MW, the heat capacity is 50 Gcal/h.

The Akademik Lomonosov is the lead project of a series of mobile transportable low power units to be sited in the Far North and the Far East to provide energy to remote industrial enterprises, port cities and gas and oil platforms. Rosatom has since announced plans to update its FNPP project using the larger RITM-200 reactors.