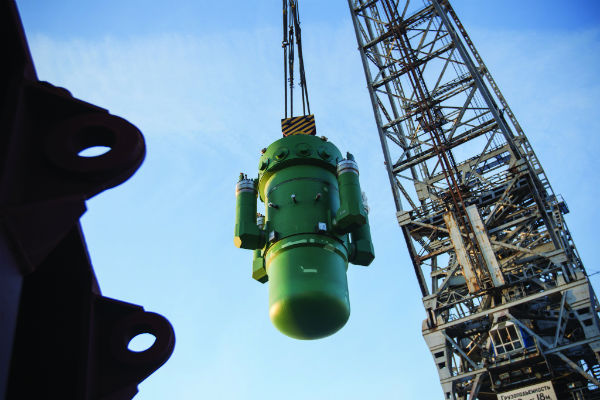 Russian state nuclear corporation Rosatom is hoping to start construction of a small-scale land-based nuclear power plant in 2024, for commissioning in 2027.

Collyer told delagates that Rosatom SMRs could be a good alternative to diesel generators, providing reliable power supply and preventing harmful emissions at a competitive price. They could also be used for desalination, heat production and supply of electricity, he said.

He also pointed out that Rosatom has already constructed six RITM-200 reactors and that two onboard the Arktika icebreaker have already attained criticality.

Rosatom is looking to build a land-based SMR in Russia.

Rosatom and Yakutia signed an agreement on interaction and cooperation in the construction of low-power nuclear power plants in September 2019,

Yakutia governor Aisen Nikolaev said there were plans to select a site for the construction of a 50-75MWe station in 2020.

Earlier in 2019, Rusatom Overseas (RAOS) and the financial GHP Group had signed a memorandum of understanding on the development of energy supply for the Suroyamskoye field in Chelyabinsk, which has iron ore reserves of 13.8 billion tonnes.

The agreement relates to the procedure for construction of a land-based power plant based on the RITM-200 reactor, including site selection and a feasibility study.

Specialists from the Melentiev Energy Systems Institute of Siberian Branch of the Russian Academy of Sciences are also studying the feasibility of constructing a land-based plant with a RITM-200 reactor in Chukotka.

RAOS president Evgeni Pakermanov, said in an interview with Rosatom Country, that low-power nuclear plants have good prospects in different countries, including in Europe.

"We are already seeing serious competition in this segment from leading vendors and are ready to offer cost-effective and reference technologies," he noted.

Pakermanov said Rusatom Overseas was discussing cooperation in the construction of low-power NPPs based on the latest RITM-200 reactor installation. “The work is going well. This is the most advanced technology to date, and in a fairly short time, it can be implemented in the design of a land-based nuclear power plant.”

Land-based nuclear power plants with two RITM-200 reactors are under consideration for electric and thermal energy production and desalination of water.

The RITM-200 will also be used to power the new nuclear icebreakers now under construction.

The RITM-200 is a light water nuclear reactor developed by OKBM Afrikantov and manufactured by ZiO-Podolsk.

It has a dual circuit with four steam generators integrated into the body of the reactor. Traditionally, steam generators are housed separately and connected to the reactor by primary coolant pipelines. The integrated layout reduces the material consumption and dimensions of the installation, reduces the risk of leaks from the primary reactor loop, and facilitates installation and dismantling of the installation. Four main circulation pumps are located around the reactor vessel.

The reactor will have a thermal capacity of 175MW, providing power on the shaft of the propulsion system of 30MWe (in the transport version) or 55MWe (in the energy version). It uses uranium fuel enriched to 20% with a fuel load every seven years. Because of its integrated design, the RITM-200 is two times lighter, more compact and 25 MWe more powerful than the KLT-type reactors used on the Akademik Lomonosov floating NPP.

A project based on the RITM-200 is being developed with OKBM Afrikantov, the State Specialised Design Institute (GSPI), and several other industry organisations, Pakermanov said.

“We understand the main parameters of the future station. However, the nuclear market is conservative: when you offer a new product to customers, you need to show how it works. Therefore, now we are choosing a site for the construction of the first small ground nuclear power plant, which will become the prototype,” Pakermanov said.

Photo: The RITM-200 has been used on Icebreakers. Now Rosatom is looking to build a pilot project on land