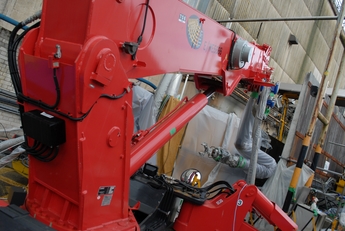 A bespoke robot has been used to safely remove a significant hazard associated with the First Generations Magnox Storage Pond (FGMSP), which was built in the 1950s to store, cool and prepare Magnox fuel for reprocessing at the Sellafield site.

The pond holds some 14,000m3 of contaminated water, which contains Magnox spent nuclear fuel, radioactive sludges, miscellaneous nuclear wastes and skips. The plan is to progressively retrieve and treat the radiological inventory in the facility.

The robot, which has a unique powered remote manipulator arm (PRM), has recently been used to isolate and remove redundant pipework in a high radiation area, and to clean and seal a contaminated pond wall.

The robot was developed together with specialist contractor SA Robotics, while new resins and foams to seal the pond wall and isolate the pipework were developed in conjunction with AMEC.

Paul Farran, head of projects, FGMSP said: “The operation demanded surgical precision in an industrial context and the completion of this vital piece of work helps us get on with the job of retrieving nuclear wastes from the pond.”

“At all times safety was the over-riding priority and although the job was high risk, it was a job that was long overdue,” added Farran.

Sellafield Ltd can now move forward with emptying the pond and the eventual decommissioning of the building.