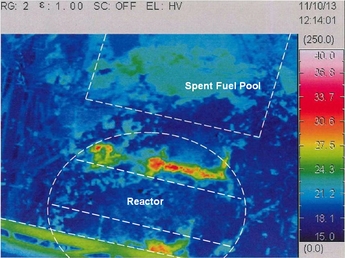 An infrared camera attached to a construction crane above Fukushima Daiichi has recorded maximum temperatures of 35°C at unit 1 and 40°C at unit 3. No steam emission was found.

Temperatures do not exceed 40Â°C

The unit 1 reactor building cover will be completed by the end of October, TEPCO reported. Installation of wall and roof panels was completed on 14 October. Now, the air filter is being tested and spent fuel pool injection piping is being installed.

A remote-controlled robot surveyed radiation levels inside the unit 1 reactor building ground floor. Radiation doses in a small part of the building were found to be less than half of what they were in early June, but still too high for human access (ranging from 260-4700 mSv/hr). Temperature ranged from 21-24°C, and relative humidity from 39-48%. Also, no steam was detected in a place where there was a steam leak in June.

The unit 2 and unit 3 reactor pressure vessel bottom temperatures were 83°C and 73°C respectively as of 15 October; both have fallen below 100°C in the past month, partly because of increased volumes of cooling water sprayed into the core from above. The RPV of units 1 and 3 have stabilised below 100°C; changes to water injection volume on a trial basis have verified that the unit 2 RPV can be stabilised, but has not been so yet, TEPCO said.

Keeping the RPV bottom temperatures below 100°C is a necessary condition for achieving cold shutdown in units 1, 2 and 3, but cold shutdown also depends on securing the circulating water cooling system in the mid-term, and on relatively low primary containment vessel radioactive materials release (provisionally 0.2 mSv/year at site boundaries).

As of early October, the processing facility has an improved desalination system; this will enable more stable water injection into the reactors.

Approximately 128,000 tons of contaminated water have been tested as of 13 October.

A deep groundwater shielding wall will start work toward the end of October. It was designed in August.