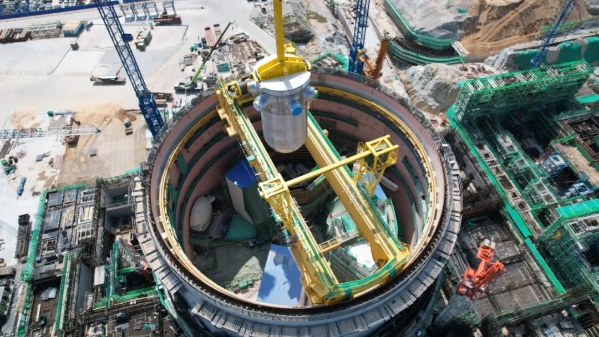 China National Nuclear Corporation (CNNC) announced that the reactor pressure vessel (RPV) had been successfully installed at unit 1 of the Zhangzhou NPP in Fujian province.

Installation of the Hualong One RPV, designed by the China Nuclear Power Research and Design Institute, was completed in nine hours.

A contract was signed with China First Heavy Machinery Company Limited (CFHI) in 2016 for manufacture of the Zhangzhou 1 RPV, which passed the factory acceptance inspection in July. The pressure vessel has a net weight of 316t and a hoisting weight of 461.8t, making it extremely difficult to flip, hoist and seat, CNNC noted.

The Zhangzhou NPP team optimised the construction logic of the pressure vessel insulation layer, shortened the equipment turning and hoisting time, and adopted a new integrated e-type turning device to complete a series of actions such as turning and erecting, removing the holding ring, and lifting from the ground.

CNNC said the main nuclear island equipment is now in place and the inner dome will be hoisted at the end of October.

The Ministry of Ecology and Environment issued construction licences for Zhangzhou 1 and 2 in October 2019 to CNNC-Guodian Zhangzhou Energy Company, owner of the Zhangzhou NPP project, set up by CNNC (51%) and China Guodian Corporation (49%) in 2011. The licences are valid for 10 years.

Work on Zhangzhou 1 began a week after the construction licence was issued and construction of Zhangzhou 2 began in September 2020. In May 2014, the local government approved Phase I of the Zhangzhou plant, which was then to comprise two AP1000 units. Regulatory approval from China's National Nuclear Safety Administration approval followed in December 2015 and site selection was confirmed in October 2016. Construction of Zhangzhou Phase I was originally expected to start in May 2017, but CNNC then decided to use the Hualong One design instead. Two more units are planned for Phase II and a further two for Phase III.