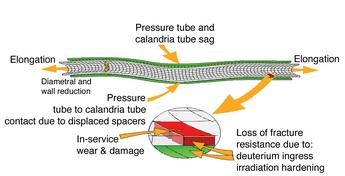 Ending years of uncertainty, the government of Canada’s New Brunswick province has taken the decision to refurbish the Point Lepreau plant at a cost of C$1.4 billion ($1.15 billion). The 680MWe Candu 6 reactor, which is the only nuclear unit in the Atlantic province of New Brunswick, was to be permanently shutdown in 2008 but will now enjoy a 25-year life extension.

New Brunswick’s conservative premier Bernard Lord announced that the province will fund the project, which he said represents “the lowest-price option of all the options on the table.” Lord had asked liberal prime minister Paul Martin to provide central government funds for the refurbishment but had been turned down. Martin said that such a deal would create a bad precedent because other provinces with units in need of refurbishment might then seek government funds. But Lord said: “We were very disappointed by the decision to say no to New Brunswick. I’m also surprised that they would support the nuclear industry in foreign countries, such as China, but not support the industry here at home.”

With the cost of a permanent shutdown estimated at C$500 million ($413 million), refurbishment was seen by many as a more acceptable economic and environmental option than construction of replacement fossil capacity, although Lord said the agreed deal exposes the province to more financial risk than he would like. Lord told a press conference: “We acknowledge that New Brunswick is taking on more risk than we had originally intended. I think it’s important for everyone to realise that.”

The project, which will begin in 2008, could be worth up to C$700 million ($575 million) to AECL but according to government sources the state-owned company would face stiff penalties if work is not completed by September 2009. The penalties themselves and their methods of collection have not so far been made public.

Earlier in the Point Lepreau refurbishment saga a contract between plant owner Point Lepreau Refurbishment Review report, Robin Jeffrey explained that a condition of that contract was that AECL’s maximum penalty in the event of delay would not exceed C$250,000 per day and would be capped to C$10 million. Such a 40-day delay would have costed NB Power C$30 million in replacement electricity costs. Jeffrey recommended that deal be renegotiated and said that under such an arrangement the refurbishment was uneconomic (see NEI June 2004, p7).

AECL’s successful bid was chosen in preference to a bid from Bruce Power which would have seen it operate Point Lepreau and sell electricity back to NB Power over a number of years. Although that bid would have been less risky for the province, it would have seen the end of NB Power’s nuclear operational capability and would have cost taxpayers an additional C$450 million ($370 million) compared to the AECL deal.

THE REACTOR; THE WORK

Point Lepreau was the first Candu 6 unit to be licensed for operation, entering service in 1982. It will now become the first Candu 6 to undergo full refurbishment. Original designers AECL have been awarded contracts for three aspects of the overall project: retubing – in which all 380 fuel channels and associated feeder tubes will be removed and replaced; the construction of a facility at the site to store removed highly radioactive material such as the tubes from the reactor core; and the removal and upgrading of a number of plant components.

The Candu design houses fuel bundles horizontally. Each fuel channel is made up of the pressure-retaining pressure tube, which is surrounded by a calandria tube to minimise heat loss to the heavy water moderator. An end fitting assembly is attached to the fuel channel to allow on-power refuelling of individual channels.

The pressure tubes within the channels are exposed to high neutron flux and to high temperature pressurised heavy water. Under these harsh conditions they undergo metalurgical changes, mainly longitudinal and diametrical elongation (creep). This effect was taken into account during the reactor assembly design and was included in the safety analysis. After a period of about 30 years, depending on the integration of the neutron flux with time, the tubes have to be replaced. Although elongation is not uniform for each channel and not all the channels will have reached their design limit, it is preferable to replace all the tubes in a single outage.

NB Power will be responsible for other aspects of the project including normal maintenance shutdowns and fuel and heavy water removal and reloading. NB Power will buy replacement power from sources in the USA during the refurbishment outage.

Potential limits to Candu pressure tube life New Brunswick Power (NB Power) and AECL was described as being not in the public interest. In his 2004