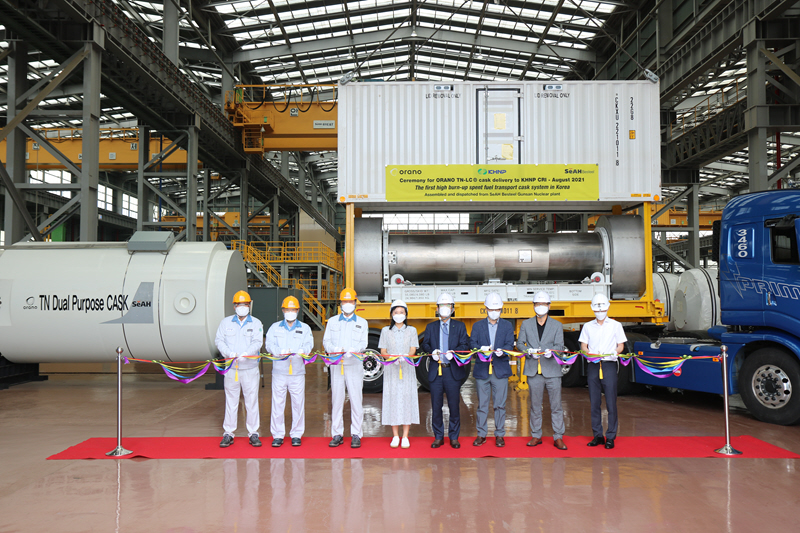 US-based Orano TN announced today that it has delivered its first TN-LC® transport cask to a delegation from Korea Hydro & Nuclear Power Co., Ltd. (KHNP), the operator of 24 nuclear reactors in South Korea. It is first transport cask licensed for high burnup used nuclear fuel in that country.

On 22 June, KHNP received a licence for the first TN-LC transport cask from the Korean Nuclear Safety and Security Commission (NSSC).

The TN-LC final assembly and testing was carried out in Gunsan, South Korea at SeAH Besteel Nuclear Shop, Orano’s regional partner for the development of high-quality casks.

"KHNP is very pleased to receive this TN-LC through a good partnership with Orano. TN-LC will be utilized for safe transportation of the KHNP used fuel and newly developed fuel," said Han-gon Kim, president of KHNP Central Research Institute.

Orano said that the cask is intended for transport of used nuclear fuel between KHNP sites, but will also be used for global transport services under the TN-LC’s international licenses in the USA and other countries. The cask is versitile and can support both wet and dry used fuel loading procedures, it added.

The first use of the cask is planned by the end of 2021 for an international transport between South Korea and Sweden.