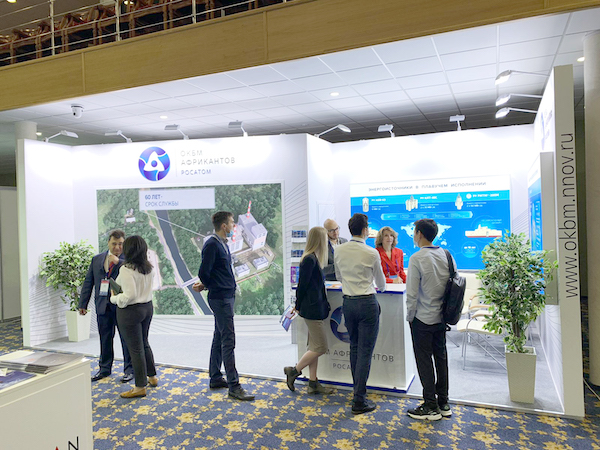 Russia’s OKBM Afrikantov has presented details of new developments of transportable nuclear power units at the15th international exhibition and conference on the development of oil and gas resources in the Russian Arctic and the continental shelf of the CIS countries, RAO / CIS Offshore-2021, in St Petersburg.

OKBM said the developments are intended for the development of the Russian Arctic. These include a fundamentally new design of the RITM-200M installation for an optimised floating power unit. “Such a mobile power unit is capable of producing electricity or providing combined production of electricity and heat for residential and industrial consumers,” OKBM noted. It can also be installed as a small ground-based nuclear power plants.

OKBM designers have also developed a nuclear power plant, "Iceberg", for underwater and ice complexes  designed to supply power to drilling and production facilities. In addition, a new generation ABV-6E reactor plant with an increased service life for floating and ground-based application was presented.

OKBM said the RITM-200M unit is part of a wide range of low-power NPPs being developed by Rosatom. A nuclear power plant based on the RITM-200 reactor unit with a capacity of 50MW will be the flagship project for ground-based plants. This is a universal scalable solution that is suitable both for countries that are not ready to implement a high-power NPP project, and for territories with limited energy infrastructure and remote regions, OKBM noted.

A special feature of the nuclear power plant is the placement of two reactor plants in individual containment shells in one building (the layout is traditional for shipboard reactor plants). This solution makes it possible to implement a single complex of systems and equipment that serves both reactors at once (refuelling complex, storage of fresh and used nuclear fuel, radioactive waste, water treatment systems, etc.), while ensuring the independence of both, almost the same as having two single unit reactors on one site.