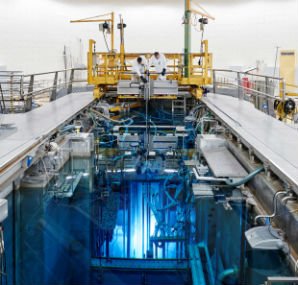 NRG of the Netherlands said on 25 January that it has started irradiation testing Eurofer97 low-activation stainless steel that will be used in the Iter nuclear fusion reactor under construction at Cadarache in southern France. The steel will be used to contain the Iter reactor components in which tritium will be used.

The irradiation of two capsules with steel samples in the High Flux Reactor at Petten began in December 2016 and will continue up to early 2018. Two shorter irradiations will start in February and will last until September. The metal will then be removed from the reactor and transported to Studsvik in Sweden where it other tests will take place to ascertain the impact of irradiation, the brittleness of the materials, the microscopic changes that take place and the extent to which the strength characteristics are affected. The Swedish analysis should show whether the materials are suitable for use in the Iter core.

The Iter project is an international joint venture involving the European Union (EU), Japan, South Korea, China, India, the US and Russia. It is designed to produce 500MWe and should be operational by 2025. Many components are still being developed, including the steel casing inside which tritium is produced by interaction with the neutron radiation generated in the fusion reaction. For this process, six different concepts have been developed globally, two of them in Europe. The most effective concept will ultimately be used in future nuclear fusion reactors. “China, for example, is also developing a module to produce tritium. So if one concept doesn’t work, there’s always an alternative,” explained NRG Project Manager Nora Klaassen.

NRG said this is the HFR’s  second recent contribution to Iter. In September 2016, NRG started testing components of the first wall that will encase the 150m degree fusion process in the core. Now, together with Swedish company Studsvik NRG will characterise the Eurofer97 steel, which will be used to contain the Iter reactor component in which tritium will be produced. Eurofer97 is a specially developed low-activation steel, in which the composition is tailored such that long term radioactivity after exposure to radiation is significantly reduced. The test aims to demonstrate that Eurofer97 is sufficiently resistant against the radiation environment in Iter.  During the tests,   the steel will be exposed to the same neutron radiation and temperature as in the Iter plant.

Earlier, Fusion for Energy (F4E), The EU organisation responsible for Europe's contribution to Iter,  signed a contract with Saarschmiede GmbH Freiformschmiede of Germany to deliver various Eurofer97 finished products. A total of approximately 27t will be manufactured in the form of special plates and bars of various thicknesses from 1.2 to 45mm. The completion of the manufacturing, testing operations and acceptance of the Eurofer finished products, storage and delivery is expected to take 17 months.