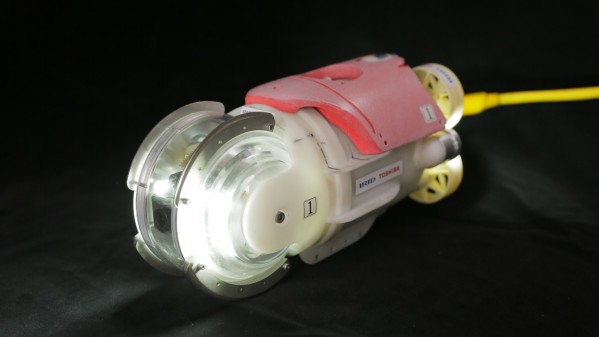 A small radiation-hardened, submersible robot will be used to inspect the primary containment vessel (PCV) of Fukushima Daiichi unit 3 this summer.

A survey in late 2015 found the PCV flooded with coolant to a depth of about 6m. To determine how to advance the plant’s cleanup, fuel and other debris submerged in the coolant must be located and mapped.

The robot, developed by Toshiba and Japan’s International Research Institute for Nuclear Decommissioning (IRID), is 13cm in diameter – small enough to enter the 14cm penetration that gives access to the primary containment vessel. Equipped with front and rear facing video cameras and LED lights, it will move through the coolant in the PCV using five thrusters, delivering a video feed that can be used to confirm the damage to the PCV interior and provide information on how best to retrieve fuel debris.

Toshiba has already developed robots for use at Fukushima, including PMORPH, which became stranded in unit 2 earlier this year.

Goro Yanase, General Manager of Toshiba’s Nuclear Energy Systems & Services Division, said the for the unit 3 PCV inspection the developers to “meet the specific challenges of limited access and flooding, in a highly radioactive environment.”

“Working with IRID, we succeeded in developing a small robot with high-level radiation resistance, and through its deployment, we expect to get information that will support the advance of decommissioning,” Yanase said.

The robot will be deployed ‘this summer’ after operator training.