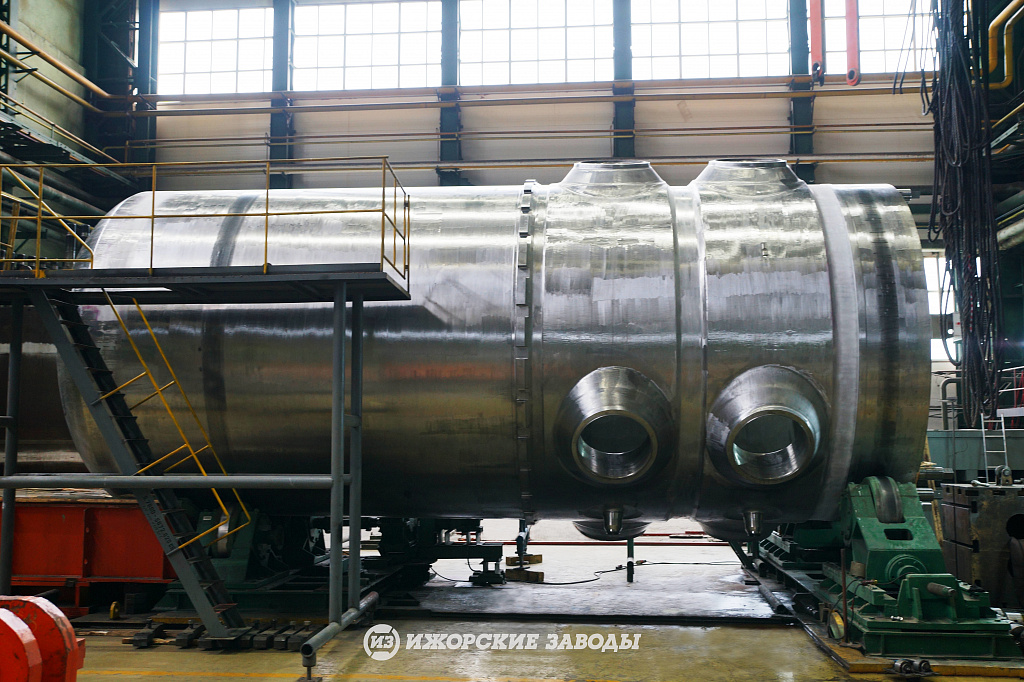 Russsia’s Izhorskiye Zavody (Izhora Plant - part of the OMZ Group) has completed hydraulic tests on the reactor pressure vessel (RPV) for unit 2 of the Akkuyu NPP under construction in Turkey.

The equipment is manufactured under a contract with AEM-Technologies (part of Rosatom’s mechanical engineering division Atomenergomash).

The results of hydraulic tests were assessed by a commission, which included representatives of Turkey’s Agency for Nuclear Regulatory (ANR), AEM-Technologies, Atomstroyexport, VPO ZNPP, FSUE VO Safety and specialists from the Izhora Plant. The tests of the RPV were carried out using a special test bench. The body was filled with water, which was heated to a temperature of 68 degrees Celsius, then the pressure was gradually increased to a maximum value of 26.4MPa. After holding the vessel for 10 minutes at the highest pressure, the inspectors assessed the quality of welded joints, strength and density of the base metal.

The commission confirmed that the hull meets all the requirements of the design and technological documentation. At present, the company's specialists are preparing for the control assembly of the vessel with internals and the upper block cover - the final stage in the process of manufacturing the RPV before shipment to the customer.

Under a supply contract signed in 2017, Izhorskiye Zavody has already shipped ECCS tanks and embedded parts for Akkuyu 2. Now in production, in addition to the RPV, are internals (internal shaft, baffle, block of protective pipes), an upper block, seal parts for the main reactor connector, a support ring, a thrust ring, a main circulation pipeline and a number of other devices and mechanisms.

Meanwhile, Ukraine-based Energomashspetsstal (EMSS) said on 2 September that it is preparing to send another large batch of blanks for Akkuyu NPP to Turkey. Within the framework of a long-term contract, EMSS has manufactured another set of blanks for Akkuyu units 3 and 4. All products have passed quality control and have been accepted by the customer. Acceptance inspection of the blanks took place at the EMSS site in late August. The inspection was attended by officials from ANR.

Some 16 blanks were handed over to the customer for the production of the main circulation pipeline (MCP), the main circulation pumping unit (MCPU) and the steam generator for Akkuyu 3 and 4. The batch includes pipes of various diameters, body blanks, flanges, branch pipes and other products. The total weight of finished products is 152 tons.

In 2020 EMSS passed an audit by ANR, which renewed the certificate of the manufacturer of blanks for the equipment of the Akkuyu NPP until January 2026.

Rosatom is building four VVER-1200 reactors at Akkuyu, under a build-own-operate model. Construction of the first unit began in 2018, with start-up planned for 2023. The 4800MWe plant when completed is expected to meet about 10% of Turkey's electricity needs.