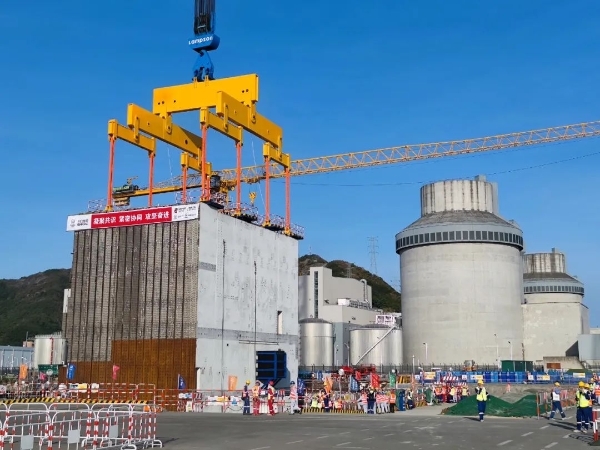 The 1000-ton CA20 – a large steel structural module for fuel storage, fuel transfer, heat exchange and waste collection – was lifted into place on 16 August at unit 3 of China’s Sanmen NPP in Zhejiang province, China National Nuclear Corporation (CNNC) announced. The CA-20 is the largest and heaviest structural module on the nuclear island. Sanmen 3 is a CAP1000 reactor design – China’s adaptation of the Westinghouse AP1000 – which uses modular construction techniques, enabling large structural modules to be built at factories and then installed at the site.

The CA20 is cuboid in shape, with a length of 20.5 metres, a width of 14.1 metres, and a height of 20.9 metres. To install it in the 5th and 6th areas of the nuclear island auxiliary powerhouse it was lifted into place by a 2,600-ton crawler crane. The entire hoisting process was safe and quality controllable, and the installation accuracy was controlled within 3 mm tolerance, CNNC noted.

Because of its heavy weight, large size, and internal complexity, the CA20 module requires a large amount of welding. As the on-site assembly site is close to the sea, where the wind is strong and the air is humid, automatic welding is used. This includes full penetration butt welding, some plug welding and fillet welding. This minimises labour, ensures stable welding quality and reduced construction time.

More than 1376 cubic metres of concrete will now be poured to fill the walls of the CA20 module.

China’s State Council in April approved the construction of two new reactors at each of the Sanmen (3&4), Haiyang NPP (3&4) in Shandong province, and Lufeng NPP (5&6) in Guangdong province.

Two Westinghouse AP1000 units are already in operation at Sanmen and Haiyang, and two CAP1000 units were approved for the second phase of each station. First concrete was poured for the nuclear island of Sanmen 3 in June. Lugeng 5&6 are expected to be Chinese designed Hualong One units. The proposed construction of four CAP1000 reactors (units 1-4) at Lufeng was approved by the National Development and Reform Commission (NDRC), but has not received State Council approval.

Image: The CA20 module is hoisted into position at Sanmen Unit 3 (photo courtesy of CNNC)