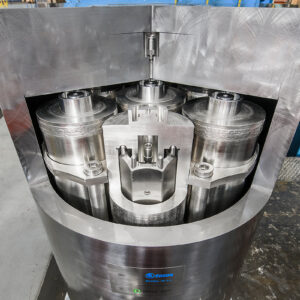 By producing a model of a storage packaging assembly (cask) for used fuel from the Dukovany and Temelín NPPs in the planned underground repository, Czech engineering company Škoda JS said it has completed development of this type of cask. The client is the Radioactive Waste Repository Authority (SÚRAO).

Within the project, the optimal design of the cask was proposed and, on the basis of corrosion tests in a simulated environment of the future repository, materials with high corrosion resistance were selected which will guarantee the storage of used fuel for hundreds of thousands of years without breaking the cask's hermeticity.

This guarantees the most important aspect - no leakage of radionuclides to the external environment. Corrosion tests of the material were carried out in cooperation with experts from the subcontractors of this project, R&D company ÚJV Rež (part of CEZ), the University of Chemical Technology in Prague, and Energovýzkum in Brno.

The cask consists of an outer casing made of thick-walled carbon steel tube with a diameter of 914mm. Inside the outer casing there is a built-in structure consisting of inner shells made of thick-walled stainless steel. Each shell is designed for one fuel assembly. In the case of the VVER 440 fuel (Dukovany NPP), the cask assembly contains seven inner shells, and in the case of the VVER 1000 fuel (Temelín NPP), the cask assembly contains only three shells because these fuel assemblies are larger. Both the shells and the outer casing are hermetically sealed on both sides by welded-on lids.

The final welding of the lids will be carried out by welding robots in the so-called hot chambers on the site of the underground repository. The fact that each fuel assembly is hermetically sealed in a separate shell increases the safety of the fuel handling during transfer to the storage casks.

The length of the casks is determined by the type of fuel stored. For the fuel from Dukovany, the designed cask has a length of almost 4 metres and a weight of 14 tons; for the fuel from Temelín, the length is almost 5 metres and the weight is 18 tons. The diameter of both types of cask is the same (914mm) with a view to unification of the underground repository, in particular the handling and welding robots, transport means or the boreholes in the rock in which the casks will be embedded.

The model of the cask is made in real diameter, but in a shortened length to allow it to be placed in SÚRAO’s planned information centre. For this purpose, the model is made with a partial cut-out to allow a view of all the details of its construction.

The development of the packaging assembly for the underground repository is a logical continuation of Škoda JS's experience in the entire used nuclear fuel management cycle. Škoda JS manufactures storage racks for pools where used fuel is stored after being removed from the reactor. After several years of storage in the pool, the fuel assemblies are transferred to storage and transport casks, which are stored in dry intermediate storage facilities at NPPs.

For this purpose, Škoda JS used to supply NPPs with Castor casks manufactured under licence from the German company GNS, but now supplies Škoda 1000/19 and Škoda 440/84 casks according to its own design. The fuel is expected to be stored in these containers for 60 years. After this time, the fuel assemblies will be transferred to the packaging assemblies for the underground repository. In 30 years, Škoda JS has produced almost 470 storage containers for radioactive materials, the absolute majority of them for used nuclear fuel. Škoda JS is part of Russia’s OMZ engineering group.