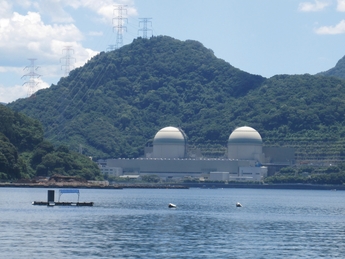 The reactor, which uses uranium-plutonium mixed oxide (mox) fuel resumed operation on 29 January, under the stricter safety rules set after the 2011 Fukushima nuclear disaster, and reached criticality the following day. It had been offline since February 2012.

In April, a district court banned Kansai Electric from restarting the Takahama 3 and 4 (both 870MWe pressurized water reactors that began commercial operations in 1985), citing safety concerns, but then lifted the injunction in December. Kansai Electric aims to restart unit 4 in late February also using mox fuel and began loading fuel into the reactor on 31 January.

Takahama 3 is the third reactor to start operating under the more stringent post-Fukushima regulations. Units 3 and 4 at Kyushu Electric Power Co's Sendai NPP in Kagoshima Prefecture restarted last August and October, respectively. Next to restart, sometime after April, is likely to be unit 3 at Shikoku Electric's Ikata NPP in Ehime Prefecture ( a 890MWe PWR). Other PWRs that are in the final stages of assessment for restart by the Nuclear Regulation Authority (NRA) are Takahama 1 and 2 (826MWe each) units 3 and 4 at Kansai Electric's Ohi NPP also in Fukui Prefecture (1,180MWe each) and Kyushu Electric's Genkai NPP units 3 and 4 in Saga Prefecture (1,180MWe each). Of Japan's BWR units, only Tokyo Electric Power Co's Kashiwazaki-Kariwa NPP units 6 and 7 (1356MWe each) are in a relatively advanced stage of NRA assessment.

Although the restart was largely welcomed by local businesses and the town of Takahama, which rely on subsidies and service industry trade, residents a some local governments have expressed concerns about the adequacy of evacuation plans and storage of used fuel.

About 180,000 people live in 12 towns and cities within 30km of NPP. While there are plans on paper to evacuate some Fukui residents to Hyogo, Kyoto, and Tokushima prefectures, many municipalities there have no detailed plans for receiving evacuees. Kyoto Governor Keiji Yamada said he did not feel adequate local consent had been obtained, citing concerns about evacuation issues. Shiga Governor Taizo Mikazuki said there was a lack of sufficient disaster planning. Osaka Mayor Hirofumi Yoshimura said plans for disposing used fuel, given the lack of intermediate and final storage facilities, were unclear. The city of Osaka owns about 9% percent of Kansai Electric stocks.

Fukui hopes the two restarts will result in more central government subsidies for hosting the plant. The prefecture received JPY30.6bn ($253m) in nuclear related subsidies in fiscal 2014. Kansai Electric says that by restarting Takahama 3 and 4 it will bring it an extra JPY144bn in annual revenue, which will allow it to reduce utility rates. However, the restarts will also pose problems related to used fuel. The storage pools for Takahama 3 and 4 are expected to be full in about eight years. Kansai Electric plans to remove the fuel and nuclear waste to an intermediate storage facility for 50 years before moving them to final storage. The utility aims to choose a site for the facility by 2020 but this is proving difficult in face of local opposition.

The use of mox fuel is also causing concern because of its plutonium content. Takahama 3 is slated to use 24 units of mox, according to Kansai Electric and unit 4 will use four units. The company imported 12 French-made mox units in June 2010 and an additional 20 in June 2013. The utility's Genkai NPP and Shikoku Electric's Ikata NPP each have about 10.7t of used mox. Among noncommercial facilities, the Japan Atomic Energy Agency currently has 63.9t stored at Fugen, an advanced converter reactor in Fukui, 23.1t at its nuclear fuel reprocessing facility in Ibaraki Prefecture, and 6.1t at the troubled experimental Monju fast-breeder reactor in Fukui.