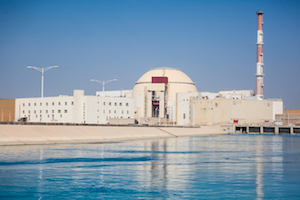 Mostafa Rajabi, a spokesman for Iran’s state electricity company, Tavanir, said resuming operation was critical to prevent blackouts in face of rising demand for electricity in Iran during the hot summer days.

The head of the Atomic Energy Organization of Iran (AEOI) Ali Akbar Salehi told the parliament's news website, Khane-ye Mellat that the shutdown was a normal occurrence in power plants and did not constitute an emergency. However, he noted that because of the US sanctions imposed after former US President Donald Trump withdrew unilaterally from the 2015 Joint Comprehensive Plan of Action (JCPOA) between Iran the P5+1 group of countries (the USA, UK, France, Russia, and China plus Germany), Iran had not been able to pay Russia the €500 million it owed for the two new nuclear units under construction at Bushehr or for fuel for the NPP. He blamed "financial issues" for delays in achieving Iran’s immediate target of 8000MWe of installed nuclear capacity.

Russia’s Permanent Representative to the International Organisations in Vienna, Mikhail Ulyanov, on 29 June categorically denied a report in the UK Independent newspaper that issues related to the financial resources of the Bushehr NPP would have affect the process of Vienna talks to revive JCPOA. The following day, UN Secretary-General Antonio Guterres appealed to US President Joe Biden's administration to lift or waive all sanctions on Iran as agreed under the JCPOA. Under the agreement Iran had undertaken to limit its nuclear development in return for the lifting of sanctions. In a report to the UN Security Council, Guterres urged the USA to "extend the waivers with regard to the trade in oil with the Islamic Republic of Iran, and fully renew waivers for nuclear non-proliferation projects”.

The US withdrawal from the JCPOA in 2018 and reimposition harsh sanctions, had prompted Tehran to review the limits imposed on its nuclear development, after one year of waiting in vain for the other parties to the deal to mitigate the effects of those sanctions. In his report, Guterres described Iran's decision to step up its nuclear development as "worrying steps" and appealed to Tehran to return to full compliance.

The European Union is coordinating the Vienna talks and EU Ambassador to the United Nations, Olof Skoog, warned: "It is clear that time is not on our side and that what might be possible still today may prove impossible in the near future. We have a limited diplomatic window ahead of us that we should not miss."

However, on 1 July, Russian Foreign Ministry Maria Zakharova said Russia expects negotiations to return the USA to the JCPOA will be successfully completed by the sixth anniversary of the Iranian nuclear deal – 14 July. “We believe that everything necessary for the restoration of the JCPOA is laid down in this very document, which was given, in general, at such a high price. Russia, like all other parties, is striving for the earliest possible completion of the negotiation process, preferably no later than the sixth anniversary of the JCPOA.” She added that Russia notes “with regret and concern”, that, “having declared its desire to return to implementation of the JCPOA, the current American administration has not yet taken any practical steps that would indicate a rejection of the destructive course of its predecessors”. In addition, Zakharova said that the early restoration of verification activities of the International Atomic Energy Agency (IAEA) in Iran in accordance with the JCPOA “is of paramount importance”.

The IAEA is currently still waiting for a response from Iran as to whether it will again extend a technical agreement to permit limited monitoring of its nuclear programme. Stringent IAEA monitoring of Iran’s nuclear activities had continued until February, when a law adopted by the Iranian parliament at the end of 2020 came into force. The law had instructed the Atomic Energy Agency of Iran (AEOI) to increase uranium enrichment activities and stipulated that Iran should suspend its voluntary implementation of the Additional Protocol, which allowed regular intrusive inspections of its facilities by IAEA.

In February, IAEA director general Rafael Grossi secured a temporary agreement to allow continued IAEA access to Iran’s nuclear activities, despite the new law coming into effect, so that diplomatic negotiations on the wider issues could continue. A temporary bilateral technical understanding was reached whereby the IAEA would continue essential verification and monitoring activities for up to three months. Grossi managed to get this extended for a further month in late May, but that deadline expired on 27 June.

Russia’s Permanent Representative in Vienna, Mikhail Ulyanov, said on 3 July that it is crucial to ensure that monitoring continues at Iran’s nuclear sites. "Technical understandings between the IAEA and Tehran have not been officially extended yet. Under the circumstances, it is important to ensure that video cameras at nuclear sites continue to work and video records are preserved. This will make it possible to avoid problems in future," he wrote on Twitter.