Interest in SMRs picks up 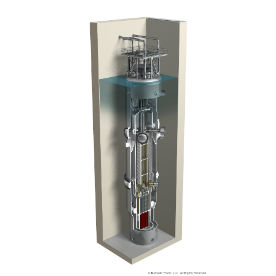 Nuclear plant designers and operators have joined a US consortium,SMR Start, aimed at boosting moves towards the commercialisation of small modular reactors (SMRs).

NEI said the US Energy Information Administration forecasts 18% growth in electricity demand by 2040. "In light of this forecast and nuclear plant retirements, the US market will need more than 100 new nuclear plants by mid-century to maintain the benefits of a diverse electricity portfolio." In December, NEI urged the NRC "to develop a regulatory framework for these new technologies that reflects their reduced security risks".

NEI vice-president of suppliers and international programmes Dan Lipman said "SMR Start will bring together the best minds and leading advocates of this technology to capitalise on its potential applications at home and abroad". He added that SMRs "can be the best option in some markets and countries not suited to large reactors while providing the same reliable, carbon-free electricity". NEI said SMR Smart "is designed to help accelerate the commercialisation of SMRs by creating an industry-driven entity" for potential reactor owners and operators to have a "unified voice in a variety of policy and regulatory issues and in creating cost-share funding structures".

The US Department of Energy (DOE) foresees SMRs playing an important role in addressing energy security, economic and climate goals if they can be commercially deployed within the next decade. DOE is currently supporting the preparation and review of the design certification application for NuScale's 50MWe SMR. NRC expects to receive the design certification application for NuScale's SMR in 2016. DOE is also supporting two SMR site licensing and permitting projects. A five-year agreement with Tennessee Valley Authority (TVA) to support an early site permit application to be followed by a combined construction and operating licence (COL) application was finalised in July 2015. TVA has been in discussions with BWXT mPower (from Babcock & Wilcox Enterprises and Bechtel Group) concerning its integral 530MWt SMR. DOE is also supporting the development of the Nuscale SMR through a cost-sharing award worth $217m over five years. The award of a three-year cooperative agreement with NuScale and Utah Associated Municipal Power Systems to conduct site characterization activities and to prepare documentation leading to a COL application was finalized in August 2015.

In November 2015, Chancellor of the Exchequer George Osborne announced R&D funding for SMRs and said a competition for funding will be held in 2016. If Nuscale receives design certification from NRC in 2016, it would be "well-placed" to seek Generic Design Assessment in the UK in 2017, Tom Mundy, executive vice president for program development Nuscale said in January. "There's then a 36-month construction time, so it's plausible to expect that if all things line up, we could have a UK plant built by 2025," he said, according to Bloomberg. NuScale would not manufacture its own reactors and has investigated the UK supply chain, he added.

On 21 January, a study by NNL confirmed that NuScale's SMR would be able to use mixed uranium-plutonium oxide (mox) fuel in addition to conventional light water reactor fuel and could be used for the effective disposition of plutonium. The study evaluated scenarios with partial and full-core loading of mox fuel and confirmed that mox could be used in the NuScale core with "minimal effect on the reactor's design and operation".

The study also demonstrated that a 12-module NuScale plant with 100% mox cores could consume a 100t stockpile of plutonium in about 40 years, "during which time it would generate approximately 200 million megawatt-hours of carbon free electricity".

Westinghouse announced earlier in January that its Springfields nuclear fuel fabrication facility in the UK has "reached the requirements necessary" for manufacturing SMR fuel assemblies. In 2015, Westinghouse proposed a partnership with the UK government to deploy SMR technology.