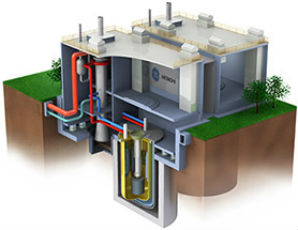 Under a memorandum of understanding announced in July, the companies will work together with the Nuclear Decommissioning Authority (NDA) to "analyse the options" for GEH's PRISM technology. NDA said in January 2014 that the PRISM reactor was a 'credible option' for managing the UK's plutonium stockpile, and is continuing to work with GEH on its commercial proposal.

PRISM is a pool-type, metal-fuelled, small modular sodium fast reactor with a thermal power of 840 MW and an electrical output of 311 MW. GEH is proposing to deploy two PRISM reactors at the Sellafield site in Cumbria where over 100 tons of the UK's plutonium is stored.

"Our extensive expertise in nuclear operations places us in the ideal position to work together with [GEH] in bringing PRISM forward for deployment in the UK," commented Alfio Vidal, Director, Iberdrola Nuclear Generation UK.

"This will not only deliver a viable technology solution for plutonium re-use, it could drive extensive investment in skills and further establish the UK, and West Cumbria, as a global-hub of nuclear expertise,"

GEH has previously signed MOUs with both the University of Manchester and the UK National Nuclear Laboratory (NNL) to study the potential UK deployment of PRISM. Now Iberdrola, which operates seven nuclear power plants in Spain, brings nuclear operations, experience of the UK power sector as well as engineering and project management expertise to the team.

The companies say they will now discuss potential roles and business arrangements in further developing the PRISM proposal.