IAEA’s Grossi addresses Board of Governors on Ukraine 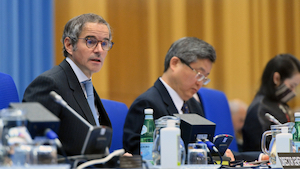 International Atomic Energy Agency (IAEA) Director General Rafael Mariano Grossi told the IAEA Board of Governors on 2 March that he was “gravely concerned" about the situation in Ukraine.

“It is the first time a military conflict is happening amidst the facilities of a large, established nuclear power programme, which in this case also include the site of the 1986 accident at the Chernobyl Nuclear Power Plant. The safety and security of nuclear facilities, and nuclear and other radioactive material, in Ukraine must under no circumstances be endangered,” he said.

“I have called for restraint from all measures or actions that could jeopardise the security of nuclear and other radioactive material, and the safe operation of any nuclear facilities in Ukraine, because any such incident could have severe consequences, aggravating human suffering and causing environmental harm,” he added.

Grossi stressed that those who operate, regulate, inspect and assess the nuclear facilities in Ukraine must be able to “continue to do their indispensable jobs safely, unimpeded and without undue pressure”.

The IAEA has been monitoring the safety and security of Ukraine’s nuclear facilities through its Incident and Emergency Centre (IEC) and was receiving updates from the State Nuclear Regulatory Inspectorate of Ukraine (SNRIU), Grossi told the Board of Governors (view the video address).

Russia takes control of area around Zaporozhye and Chernobyl

He went on: “Russian forces have taken control of all facilities of the State Specialised Enterprise Chernobyl Nuclear Power Plant, located within the Exclusion Zone. No casualties or destruction at the industrial site were reported. While increased levels of radiation were initially measured at the site, likely due to the movement of heavy military vehicles disturbing the soil, the IAEA assessed that they remained low enough not to pose a hazard to the public.”

He stressed the importance of the Chernobyl staff being able “to do their job safely and effectively, and that their personal wellbeing is guaranteed by those who have taken control”.

Gross said that the previous day he had received a letter from the SNRIU “requesting me to extend immediate assistance to ensure the safety of the Chernobyl nuclear power plant and other nuclear facilities in the country. I am conducting consultations in order to address this request for assistance.”

He recalled earlier incidents in which missiles had hit the site of a radioactive waste disposal facility in Kiev but with no reports of damage to the building or any indications of a radioactive release. This followed a strike the day before which damaged an electrical transformer at a similar disposal facility near the north-eastern city of Kharkiv, also without any reports of a radioactive release.  He noed that the two incidents “highlight the risk that facilities with radioactive material may suffer damage during the armed conflict, with potentially severe consequences”.

He urgently appealed “to all States, without exception, to reaffirm their commitment to upholding international law and to fulfilling the obligation they agreed to when the IAEA General Conference unanimously adopted a decision in 2009 to reaffirm resolutions adopted in 1985 and 1990, stating that “any armed attack on and threat against nuclear facilities devoted to peaceful purposes constitutes a violation of the principles of the United Nations Charter, international law and the Statute of the Agency”.

As regards safeguards, Grossi told the Board that “safeguards in Ukraine are under the Comprehensive Safeguards Agreement and the Additional Protocol of Ukraine, and that the Agency’s safeguards activities are ongoing”.

He concluded: “Let me end by saying this: the best action to ensure the safety and security of Ukraine’s nuclear facilities and its people would be for this armed conflict to end now."

IAEA Director General Rafael Mariano Grossi delivers his remarks at the opening of the Board of Governors meeting on Wednesday at the IAEA headquarters in Vienna. (Photo: D. Calma/IAEA)