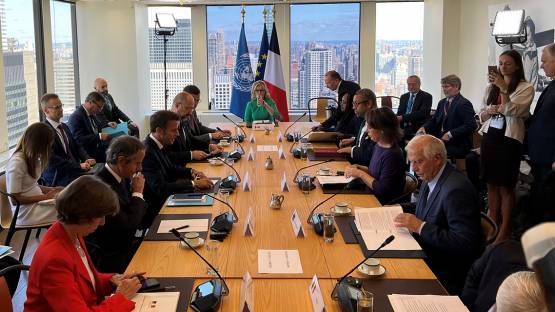 An IAEA proposal to establish a nuclear safety and security protection zone around Ukraine’s Zaporizhzhia Nuclear Power Plant (ZNPP) is receiving strong international support and detailed talks have now begun with Ukraine and Russia aimed at agreeing and implementing it as soon as possible, IAEA Director General Rafael Mariano Grossi has revealed after a series of high-level meetings in New York.

In a sign of growing momentum for such a zone to protect Europe’s largest NPP, French President Emmanuel Macron on 21 September hosted an event in New York on the sidelines of the United Nations General Assembly to discuss the safety and security of civilian nuclear facilities in armed conflicts. The meeting was also attended by Ukrainian Prime Minister Denys Shmyhal, EU High Representative for Foreign Affairs Josep Borrell as well as foreign ministers and senior officials from several other countries.

After the meeting, chaired by Macron and Grossi, a statement was issued by nine countries welcoming this month’s IAEA Support and Assistance Mission to Zaporizhzhia (ISAMZ) and supporting the Agency’s efforts to maintain a continued presence there. It also welcomed the Director General’s work to follow up on his mission to the plant on 1 September as well as the proposals made in a report he issued soon thereafter, which include the recommendation for a nuclear safety and security protection zone around the ZNPP.

The statement was issued by senior representatives of the following countries: Canada, France, Germany, Italy, the Republic of Korea, Switzerland, the UK, the USA, and Ukraine, and the EU’s High Representative for Foreign Affairs and Security Policy.

Grossi said a nuclear safety and security protection zone must urgently be implemented around the ZNPP, which is held by Russian forces but operated by its Ukrainian staff. “I’m very encouraged by the broad support the IAEA’s proposal has received. I’m increasingly confident that the safety and security protection zone will become reality very soon. It is urgently needed. I will spare no effort to make it happen,” he said.

While in New York, Director General Grossi separately also met with Russian Foreign Minister Sergei Lavrov and Ukrainian Foreign Minister Dmytro Kuleba, as part of talks with all parties aimed at reaching an agreement soon on the zone’s establishment.