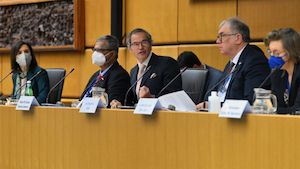 This was the fourth such conference on fast reactors, the previous events being  held in Kyoto (2009), Paris (2013) and Yekaterinburg (2017). Grossi said the next one was planned to be held in China. The conference, which included both personal and online presentations ended on 22 April.

“It’s time to focus again on fast reactors: an innovative technology that extracts much more energy from uranium and recycles nuclear waste over and over again, helping to preserve natural resources while reducing the environmental impact of waste,” Grossi said.

“To make this transition without major disruptions or price spikes like the one we are experiencing now, we will need all low carbon energy sources, including nuclear. In fact, we are going to need more—indeed, a lot more—nuclear if we are going to power economic growth and at the same time achieve net zero greenhouse gas emissions.”

“Besides being low carbon like all nuclear reactors, fast reactor systems tick key boxes when it comes to sustainability: they shrink the environmental footprint of the waste while extracting significantly more energy from the fuel. They can be a bridge to even safer and more efficient nuclear power, providing sustainable clean energy for generations,” he said.

Fast reactors operate without a moderator such as water or graphite to sustain the fission chain reaction and can extract up to 70 times more energy from the fuel than existing thermal reactors. Fast reactors can produce or ‘breed’ more fuel than they consume. And they can burn off some of the waste contained in used fuel, which thermal reactors cannot do efficiently, greatly reducing the volume, toxicity and lifespan of the high-level radioactive waste, IAEA pointed out.

Grossi said fast reactors and related fuel cycles are among several nuclear technologies needed to tackle major challenges, from climate change to sustainable development. He said he would make that case again at COP27 in Egypt in November, as he had done at COP26 in Glasgow last year.

“Finding a more sustainable way to fuel global growth and prosperity is of course one of the greatest challenges we are facing,” he noted. “To make this transition without major disruptions or price spikes like the one we are experiencing now, we will need all low carbon energy sources, including nuclear. In fact, we are going to need more—indeed, a lot more—nuclear if we are going to power economic growth and at the same time achieve net zero greenhouse gas emissions.”

Fast reactor systems enable a fully closed nuclear fuel cycle, where irradiated nuclear fuel is reprocessed and reused. Such an energy system could potentially be sustainable for thousands of years. Several countries have developed significant experience in reprocessing and recycling, which can contribute to building the basis for future nuclear energy systems where fast reactors play an important role.

Noting all technological advantages during his opening remarks, Conference Chair Arun Kumar Bhaduri of the Department of Atomic Energy of India urged Mr Grossi “to flag fast reactors as a renewable energy source, like solar or wind” when he travels to COP27, to be held in Sharm El-Sheik on 7-18 November.