Hyperion to build small reactor assembly facility in the UK 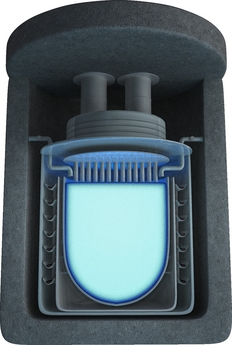 Hyperion Power Generation plans to build a small reactor manufacturing plant in the United Kingdom within the next two years. The firm says it plans to use the existing UK supply chain to build its 70MWt (27MWe), self-regulating reactor and that the UK will be its ‘launch pad’ for the European market.

“This week we’ve made the decision as a company to commit to building a manufacturing plant in the UK. Our commitment is to use the UK as a launching pad for Europe and to use the UK supply chain,” Hyperion Power Generation CEO John (Grizz) Deal told NEI in London on 30 September.

Hyperion has chosen the UK to be its European manufacturing hub because of its active nuclear community, trained staff and existing infrastructure.

“We’ve got so much demand that we need to go ahead and start planning our manufacturing facilities,” he said.

“We have customer commitments for over a hundred units already. We’re going to be very busy! In fact, we’re now scheduling deliveries out to 2018-2020 even though we expect to go to market in the 2013-2014 timeframe.”

Hyperion plans to build three manufacturing facilities: one in the USA to support the North and Latin America markets, and a third in Asia, probably Japan. Although the firm hasn’t made a decision on where its UK plant will be located, it’s likely to be near existing nuclear facilities, which are clustered around the Sellafield site in Cumbria, northeast England.

Deal said that Hyperion is in discussions with economic development organisations around the UK, as it decides where to locate the plant, which would employ around 200 people. This process that is likely to take a couple of years. “It might be possible to use existing facilities; we just don’t know yet,” he said. The firm is in discussions with the existing UK supply chain, too.

Hyperion’s small reactor would not be in competition with larger reactors and would be a source of incremental revenue to existing suppliers, Deal says.

“It’s not a case where somebody’s going to decide to buy a Westinghouse reactor or a Hyperion reactor, or even a B&W MPower reactor; they are such different scales. And they have completely different markets.”

Hyperion’s reactor can be used for decentralised power, for military installations, dedicated applications such as mining operations, factories, water treatment or sewage facilities.

Deal said that Hyperion has had several enquiries from people who want to use its reactor as a source of baseload power for wind projects. There is also the option that Hyperion reactors could be used to retrofit fossil fuel plants. “We are essentially selling the heat. That means we’re incredibly flexible for retrofit.”

When asked what role the Hyperion Power Module could play in the UK market, Deal said: “Distributed power is coming to the UK. It’s particularly important because of the ageing infrastructure. So rather than having to put up a smart grid you can make up a series of grid networks that connect together. That approach is, I think, something that you’re going to see happen in the UK.” He also revealed that Hyperion is starting to talk to people about the new Eco Towns that the UK is planning to start building from 2016.

Within Europe, the UK, Slovakia, Poland, the Czech Republic, Kazakhstan, Lithuania and Turkey have all expressed interest in the Hyperion Power Module. Deal says that since the federal elections in Germany Hyperion has received ten enquiries from German companies.

Deal said that Hyperion expects to submit its design certification application to the US Nuclear Regulatory Commission ‘within the next year’. It also plans to get its design licensed in the UK.

“We understand the process in the UK and we have sufficient customer demand. We will be applying to the Nuclear Installations Inspectorate. We’ve not had conversations with them formally because you need to get your licence application together but... within about a year or so we will be going to the NII and talking to them about the generic design assessment process.”

In terms of cost the reactor itself will cost approximately $30 million. Deal says that the firm is committed to generating electricity for less than 10 cents/kWh. “If you look in terms of reactor cost, plus plant side it comes out to be $2000/kW. But, it depends on if you’re retrofitting to replace coal or gas plants.”

The Hyperion Power Module – like the company itself, which employs less than 100 people – defines small. At just 1.5m wide and 2m tall the reactor can be transported to site by ship, rail or road. It will be able to produce power for 8-10 years depending on the application, after which it will need to be returned to the factory for refuelling.

Related ArticlesGEH to work with Italy’s EnergyLab Enel, EDF, Areva and others sign agreement for Italy Italy overturns nuclear ban Studsvik to treat waste from Italy's Caorso ENEL and EDF team up in Italy Enel and EDF lay plans for a nuclear Italy
Post to: