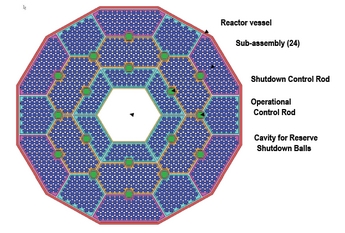 Hyperion Power has released the first technical details of the small 70MWt nuclear reactor that it is developing.

Hyperion Power Module core diagram. There are 24 assemblies of uranium nitride fuel, and 18 control rods. The centre of the core is hollow so that boron carbide marbles could be dropped in the centre to shut down the reactor in an emergency.
Although the company had originally been aiming to create a TRIGA-type reactor burning uranium hydride, it has decided for reasons of speed-to-market to focus on commercialising a liquid-metal-cooled fast reactor instead.

The Hyperion Power Module has a core of 24 assemblies of a metal fuel, uranium nitride, that is 20% enriched, set in HT-9 cladding tubes. Flowing around the pins is liquid lead-bismuth eutectic coolant. Quartz is used as a radial reflector. A gas plenum is at one end of the 2-3m long fuel pins.

Two sets of boron carbide control rods keep the reactivity of the core under control. One set of 12 control rods advance about 0.5mm/day to moderate the reaction. A second set of six shutdown rods close to the centre of the reactor would automatically drop into the core in case of an accident. The centre of the core is hollow. Inside that void space marbles of boron carbide would be dropped in case of an emergency.

The reason why the 70MWt reactor has a relatively low electrical efficiency of 36%, or 25MWe, is because the steam loop does not run through the inside of the reactor, for simplicity and safety. The factory-built and factory-sealed reactor, which weighs 50 tons, would operate like a battery: it would be slotted into place in a power station built by an undisclosed partner company, connected, and generate power continuously for seven to 10 years without refuelling. Then it would be disconnected and left to cool down for up to two years (with water) before being removed and returned to the factory for dismantling. One of the key product design criteria is that the Hyperion Power Module must fit into an existing Nuclear Regulatory Commission (NRC)?certified spent fuel shipping cask, although minor enhancements are being contemplated. Removal of decay heat from the HPM during return transport would be passive by natural convection and conduction and active by induced circulation through the tube side of the intermediate heat exchanger.

Although no fuel has been tested or manufactured for the project, Deal said that fuel burns would begin before the end of the year. He said that Los Alamos National Laboratory, whom Hyperion licensed the design from, has researched uranium nitride. It said that the Russian military has used uranium nitride fuel and the lead-bismuth coolant.

Deal also said that the company is looking to find six launch customers, some of which would run a prototype, including customers based in the US and UK. He said in mid-November that the company had signed over 120 memorandums of understanding or letters of intent with customers.

In order to have operating units within four years, Deal said Hyperion was also considering building its first pilot units in facilities that do not require approval from a nuclear regulator, such as US Department of Energy facilities, or military facilities. However, a spokesman from the NRC told NEI that any civilian (i.e. non-weapons) facility would require licensing, irrespective of its location. “Unless DOE declares something to be a research facility, or unless the executive branch declares something to be a military use, the NRC has overall authority regarding nuclear reactors. A vendor cannot unilaterally claim either of those exemptions, and neither exemption would confer any benefit in an NRC licensing review,” said Scott Burnell, public affairs officer at the NRC.

Hyperion has announced plans to submit a formal design licence application in autumn 2010, either in the USA or the UK. Burnell says that so far the NRC has had limited interactions with Hyperion. It has not received technical details regarding he reactor design and can thus not being discussing a review schedule. The NRC has, however, had interactions with B&W regarding its mPower design and NuScale Power about its small LWR. Formal submittals for these designs are expected in FY2011 at the earliest, more likely FY2012 according to Burnell. The NRC’s outer estimate for licensing an ‘innovative’ design is five years.

A spokesman for the British regulator, the Nuclear Installations Inspectorate says it too has had ‘exploratory discussions’ with Hyperion Power about the new build generic design assessment (GDA) process and the site licence application process for operation in the UK. It has also been speaking with GE Hitachi about its plans to rejoin the GDA process for its ESBWR design but has made the point that any re-entry arrangements could not prejudice the existing GDA process on the EPR and AP1000 designs.