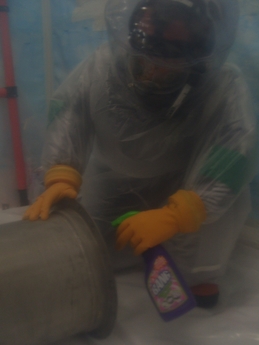 One of the UK’s best-selling household cleaners is being used to clean-up an experimental chemical plant at Dounreay. It can remove plutonium stains more effectively than many industrial clean-up products, DRSL says.

The discovery came when a decommissioning team found their normal cleaning fluid was slowing down work to dismantle an experimental chemical plant used in the 1980s to recycle plutonium liquor.

One of the team suggested trying Cillit Bang, after watching a television advert that suggested it could strip grime instantly from a 2p coin.

The idea was taken up by managers who ordered tests on the GBP1.99 household cleaner. These confirmed its effectiveness and the product is now playing a key role in the GBP9 million project to clean-out and demolition of the plant.

The four-storey chemical plant was a series of vessels, pipes and boxes made from steel and toughened glass. The solutions run through the plant left it stained with plutonium, creating a hazard for the team tasked with taking it apart.

“We need to decontaminate as much of the surfaces as possible before we can cut them up,” explained David Manson project manager with Dounreay Site Restoration Limited.

“The normal decontamination agents we’d use on steel and glass need time to dry and this slowed us down. The acids that had been used years ago also created problems. It meant we had to think carefully about the most effective way to wipe the plutonium from the steelwork before we could cut it up."

Six large glass columns and gloveboxes that formed the heart of the plant have now been cleaned up and dismantled. The glass columns were transferred to a nearby decontamination unit where another household product, Mr Muscle window and glass cleaner, was used to decontaminate them.

Dounreay is owned by the Nuclear Decommissioning Authority. Its regional director, Randall Bargelt, said: “It’s great to see DSRL taking such a fresh approach to a complex task. It really fits with the NDA’s principle of driving innovation. It is this kind of thinking which will help reduce the decommissioning cost to the tax payer while improving efficiency - ensuring that the site clean up is as thorough as possible.”

Sellafield in Cumbria is among those who have been in touch with Dounreay to learn more about the discovery.

Related ArticlesLet’s get on with it Nuclear in France - what did they get right? Westinghouse: long-term interest in UK fuel site UK government plans to build carbon price floor Simulator to assess the cost of MOXExternal weblinksNuclear Engineering International is not responsible for the content of external internet sites.here
Post to: