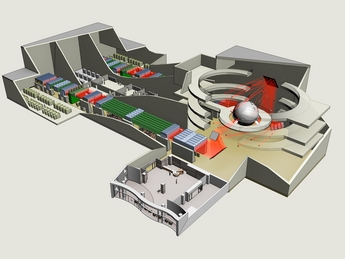 The UK-led HiPER project ultimately aims to demonstrate a credible path to laser driven fusion as a commercial energy production source and offer a broadly-based science research facility. At the October launch of the preparatory phase, Mike Dunne, HiPER project leader and director of photon science at the Science and Technology Facilities Council (STFC), said this phase of the project will evaluate the options for proceeding with the HiPER facility once the principle of laser fusion has been demonstrated. “The scientific proof of principle, after 50 years of research, is now just a couple of years away,” he said.

The anticipation of the proof of principle is based on two very large-scale lasers currently nearing completion – the National Ignition Facility (NIF) at the Lawrence Livermore National Laboratory in California, and the Laser Mégajoule in France’s Bordeaux region. Construction on NIF commenced in May 1997 and completion is scheduled for mid 2009. The $4 billion facility is the highest energy laser in the world and should achieve 4.2 million joules (MJ) in the infrared when all 192 of its beams are commissioned. Because the timescales are of the order of nanoseconds, the power of a single flash of light would be some 500TW. “It’s a laser that has a power more than 10,000 times greater than the entire power in the UK national grid,” said Dunne.

Initial attempts at achieving fusion at NIF are planned to begin in 2010. The 1.8MJ Laser Mégajoule is expected to be completed in 2010 with first experiments the following year.

Both NIF and Laser Mégajoule are inertial fusion devices, which use pulsed lasers to compress a small pellet of deuterium and tritium to achieve very high densities over very short timescales. The inertia of the imploded fuel means it remains compressed for long enough to initiate fusion. This process, known as ‘central ignition’, is analogous to that in a hydrogen bomb, where an initial fission explosion compresses deuterium-tritium capsules to cause thermonuclear ignition. NIF and Laser Mégajoule have been designed to demonstrate the scientific proof of principle for laser fusion by achieving sustained, scalable thermonuclear burn in isolated implosions.

Alongside the research towards central ignition demonstration, there has been significant investment targeted at an advanced route to fusion ignition, or ‘fast ignition’. The €80 million PETAL (Petawatt Aquitaine Laser) facility currently under construction is designed to study fast ignition. PETAL will use an advanced target concept where a pulse of up to 3.5kJ energy within a duration of 0.5-5ps heats and ignites a target fuel pellet that has already been compressed using the conventional inertial confinement fusion method. The PETAL facility will be coupled with the LIL high power laser (Ligne d’Integration Laser, Laser Integration Line), which is the first of four sets of eight beamlines that will make up the entire Laser Mégajoule system.

In the fast ignition scheme, constraints on irradiation uniformity are relaxed and high gain fusion energy production is predicted using a substantially smaller facility than is needed for central ignition. Within the next five years, such facilities are expected to provide sufficient information to allow the future path for the HiPER project to be adequately defined.

The inertially confined fusion method is at a less advanced stage of development than the magnetically confined approach. This approach, used by the €5 billion Iter facility under construction in France’s Cadarache, confines low density plasmas made up of deuterium and tritium in toroidal chambers known as tokamaks.

Dunne said that it was important to pursue all options for achieving commercially viable energy from fusion. The Iter project is “progressing very well,” he said, but “we believe that the prize is so large that we can’t put all our eggs in one basket. We need to adopt as many possible solutions as we can think of. And it turns out that there are two major solutions to fusion energy.”

Should HiPER reach the construction phase, it would require a similar level of funding to Iter. The current three-year preparatory phase of HiPER has direct funding or in-kind commitments amounting to around €70 million from several countries. About €13 of this is direct funding provided from the European Commission and the national partners. Should the project proceed, the detailed engineering phase is projected to begin in 2011, with a six-year construction phase possibly commencing by 2014.