Grossi spells out challenges in Ukraine 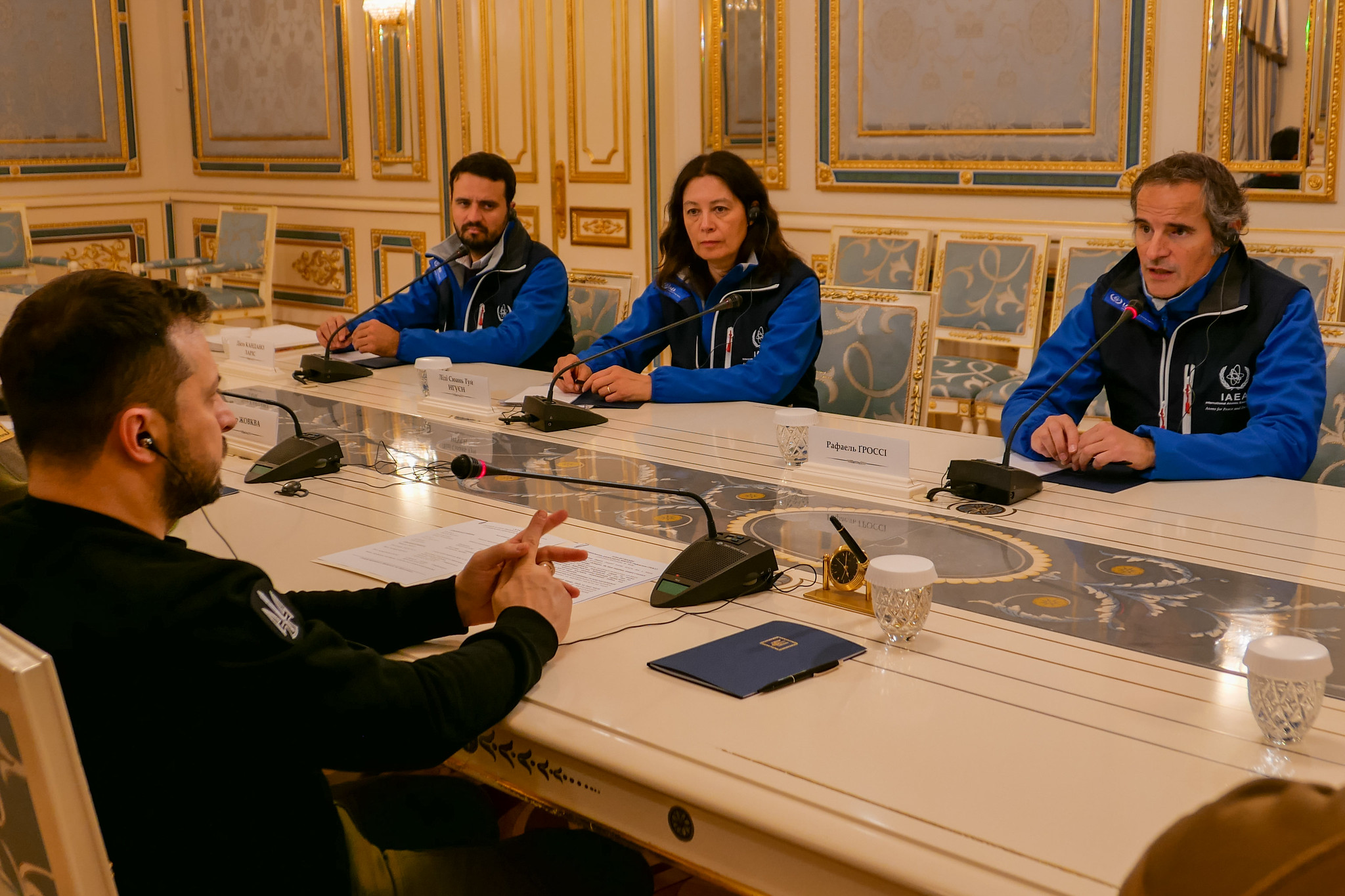 Director General Rafael Mariano Grossi had held talks with President Volodymyr Zelensky in Kyiv on the extension of IAEA activities in Ukraine.

To help ensure safety at its nuclear facilities several permanent IAEA expert missions have now been established at nuclear sites across the country. Talks also covered Grossi’s proposal to set up a nuclear safety and security protection zone around the Zaporizhia NPP (ZNPP). “Everybody agrees that the plant …in an active combat area needs to be protected, but these are very complex negotiations. I will not stop until the much-needed zone is a reality,” he said. “We are determined to do everything in our power to reduce the risk of a nuclear catastrophe during this tragic war. This week was an important step forward in our efforts in this regard. But the work is far from over. The IAEA is here to stay, for as long as we are needed.”

At a press conference following the talks in Kyiv, Grossi explained that IAEA missions were now stationed at all Ukrainian NPPs - South Ukraine, Rivni, Khmelnitsky and the Chornobyl site, as well as at ZNPP, which remained under Russian control. He said a lot of work lay ahead. “A NPP is a big place and many things need to be checked.” He pointed to issues with the supply chain under current conditions. “It is sometimes very difficult to get replacement parts and equipment needed for the normal functioning of the plant,” he noted. “So we are looking at lists of equipment that the regulator and Energoatom have given us and we will work to try to provide those. Each plant is different with different issues, which is why we have a permanent mission at each of them.”

He said that during a year, which saw the first major conventional war in a territory with a vast nuclear infrastructure, there had been many difficult moments and challenges. “However, we saw that the regulator was prepared and the staff at the plants acted as they should - and now we are here.”

He added that this had an impact on the IAEA. “Any war has a formative effect and we don’t know exactly how it will affect us. But one thing I can say – the IAEA has changed. The IAEA has been doing, and has been called to do, things that one could now have imagined before. For us it has been a challenge, but we are committed to continue doing what we are doing.”

He said he was “very worried” about ZNPP, which is on the frontline. “We know that an accident with radiological consequences may take place any day. This is why I will continue to say that the establishment of a protective zone around the plant is indispensable…This is my challenge, because the parties are not talking to each other. IAEA is putting forward suggestions that are viable, reasonable and technically sound but do not get into areas where they shouldn’t such as military operations, because that would be inappropriate.”

Noting that he had discussed the issue with President Zelensky and would soon be visiting Russia, he said: “I think it is absolutely necessary. We should not forget that the safety standards we are trying to implement have been agreed by everyone.” But he added that there were “indications that there is no engagement”. He continued: “I want to believe that the professional engagement is there. This is not a value judgement. I am not attributing merit or a lack thereof. But professional engagement is absolutely necessary.”

In reply to a question about staffing at ZNPP, Grossi said that, despite a dramatic reduction in people working at the plant, staffing was adequate. “Normally there were around 10,000 people and we are down to around 3,000. It is sufficient to run the operation in current conditions. The plants are currently in cold and hot shutdown and there are enough people for these operations. My technical staff is looking at this, including the experts on the site. As to working conditions, they are fine. Of course, it is a facility under special circumstances but they can do their work correctly. I am in contact with them several times a day.”

However, it would seem that the remaining ZNPP staff, who have now all signed new contracts with Russian nuclear utility Rosenergoatom (part of Rosatom), continue to face pressure from Ukrainian nuclear utility Energoatom. After the Zaporozhye region was annexed by Russia in October, following the results of a widely disputed referendum, the plant's facilities were transferred to Russian ownership and the Federal State Unitary Enterprise ZNPP was established. A new operator, JSC Operating Organisation of ZNPP, was set up by Rosenergoatom. Ukraine’s Energoatom, nevertheless, continues to claim ownership of the plant.

Renata Karchaa, adviser to the General Director of Rosenergoatom, said the deadline had been extended for staff to sign new contracts. He told Tass that people are afraid, but despite this, contracts are still being signed. "It's just much slower - we're clear that our priority is to preserve the ZNPP team," he stressed. He added that Russia will be able to fill all the vacant positions using the personnel reserve, but wants to keep the team together. "That's why we are extending deadlines," he noted, but admitted that "there will come a time when it will be impossible to wait", in order to ensure nuclear safety. Speaking about whether staff from other Russian NPPs would be invited to ZNPP, he said it was not yet necessary. However, Russian specialists were providing advice. "They are participating in restoration work, and help with a number of technological processes, but as engaged specialists."

In another interview with Interfax, Karchaa said ZNPP had never been modernised since its launch and Russian specialists were now conducting an audit to plan such work. The service life of three units is now planned to be extended and repairs are underway following damage caused by shelling. "The damage is, of course, colossal. There are no exact calculations yet…. A lot has been done and a lot is being done, including for protection of those premises housing fresh nuclear fuel, used fuel and radioactive materials." He added: “The station is facing big changes. Already this year, work related to both the repair campaign and the extension of the service life of power units 1, 2 & 6 will begin. We must do all this in the conditions of active integration of the NPP into the Russian legal field in full compliance with the requirements of Rostechnadzor [regulator], including staffing of the operating organisation. Therefore, it is necessary to strengthen the Zaporozhye station with specialists of similar Russian NPPs.”

Karchaa was also critical of Grossi’s comments on a protection zone for ZNPP. He said attempts by the IAEA to negotiate the creation of a safety zone around the plant were a pretence of activity. Nothing is resolved by statements that the parties agree on the creation of a security zone. “We don’t need declarations, but mechanisms”. He added that achieving such an agreement would require a large number of participants, in particular the military and military-political leadership.