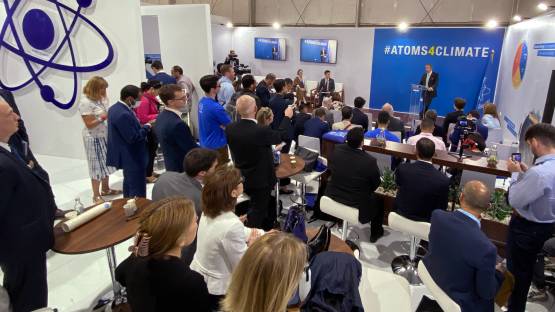 We all know that the challenges posed by climate change are very, very difficult. “This is why nuclear is here, because nuclear has a place at the table, because nuclear is part of the solution towards a decarbonised energy mix in the world,” Grossi emphasised. Although he previously attended both COP25 in Madrid and COP26 in Glasgow, nuclear’s role had played a relatively minor role in those proceedings. The IAEA pavilion at COP27, however, reflects of changing attitudes to nuclear energy as the climate crisis worsens.

Grossi announced a new IAEA Atoms for Net Zero Initiative. “Increasingly states with little to no nuclear experience approach us for guidance on meeting their climate goals with nuclear energy, this new initiative is aimed at supporting them and ensuring no one is left behind in climate solutions,” he said. Grossi is playing a very active role in the conference. Attending numerous events and holding one-to-one meetings with key people.

On 9 November he led a panel on Affordability, Resilience and Security of Energy Supply where International Energy Agency (IEA) Executive Secretary Fatih Birol said, “Nuclear power is making a comeback - and in a strong fashion.” He also joined a panel of young professionals in the nuclear field, to hear their thoughts and take their advice on avenues to pursue more inclusive climate action. “The IAEA works with the young generation, works with a new generation of scientists and technologies so that they have the opportunities to work together to face these problems, to provide the necessary solutions,” he said. He also took part in an event on “Interplay of low carbon technologies for resilient net zero energy systems”, where he joined the heads of the United Nations Economic Commission for Europe (UNECE) and United Nations Industrial Development Organization (UNIDO). All three emphasised that decarbonising energy systems will require utilising all low-carbon technologies, including nuclear energy.

In meetings with United Nations organisation heads, including World Meteorological Organisation Secretary-General Petteri Taalas and UNECE Executive Secretary Olga Algayerova, he discussed climate adaptation and cooperation on energy infrastructure vulnerable to extreme weather events. With European Bank for Reconstruction and Development (EBRD) President Odile Renaud-Basso he discussed energy policy, energy decarbonisation and joint activities on Ukraine’s nuclear facilities, including Chornobyl where the IAEA and EBRD are working towards safe and cost-effective solutions to decommission the NPP and manage radioactive waste in the Exclusion Zone.

On 11 November, the Atoms4Climate pavilion hosted an event on “How To Accelerate Adaptation to a Changing Climate? Invest in Science and Technology”. Grossi explained that the IAEA is “how we use science and technology for climate adaptation, which too often goes unnoticed”. He was joined by key executives from the United Nations, the World Meteorological Organisation (WMO), the World Bank, the Food and Agriculture Organisation (FAO), and the United Nations Educational, Scientific and Cultural Organisation (UNESCO). “Science has told us we’re heading towards disaster,” said Peter Thomson, UN Secretary General’s Special Envoy for the Ocean. “We’re on a highway to hell if we don’t make big transformations. We, at the frontline battling climate change, cannot fight our fight unless we have the integrity of good science,” he said. He commended the IAEA’s Marine Environment Laboratories for their work on ocean acidification and tackling microplastics in the ocean.

FAO Deputy Director-General Maria Helena Semedo noted: “We need to feed 10 billion people by 2030, and our natural resources are not sufficient if we continue business as usual.” She highlighted success stories of the Joint FAO/IAEA Centre for Nuclear Technologies in Food and Agriculture including a new type of cassava bred in Nigeria with 50% more yield while saving 70% of water use, as well as sending seeds into space seeking crops able to adapt to climate change on earth.

“Without nuclear energy we will have difficulties in meeting the Paris commitments,” said WMO Secretary-General Petteri Taalas, noting that so far this year the world has already exceeded the emission levels of 2019. “Adaptation is of course very important,” he added, with heatwaves, tropical storms, melting of glaciers and sea level rise to continue for the next 100 years. “It’s important that we use limited resources in a wise manner, and meteorological services play an important role in this.”

Anil Mishra, Chief of UNESCO’s Section on Hydrological Systems, Climate Change and Adaptation, highlighted the need for more emphasis on science and technology to tackle the challenge of managing water. Isotopic Hydrology is central to providing the technology to support solution-oriented activities that address the impact of climate change on water resources, such as melting glaciers. These activities feed into the 2022 International Year of Basic Sciences for Sustainable Development and are a focus of ongoing collaboration between the IAEA and UNESCO.

“We must accelerate research, invest in science, enable scientists to do their work,” said Juergen Voegele, Vice President for Sustainable Development at the World Bank. “Everything the governments do has to be climate-smart. This is only now penetrating into the politicians’ heads.” He added that the World Bank had decided to divide its $32 billion climate funding in equal shares: 50% for mitigation and 50% for adaptation projects, such as transforming food systems. “We need to do more of it and do it differently,” he added. “We need to collaborate, find ways to scale up our efforts.”