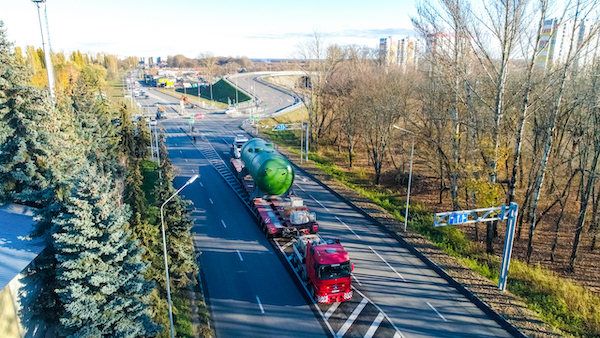 The first of four steam generators for the VVER-TOI reactor under construction at unit 1 of Russia’s Kursk-II NPP had been delivered to the construction site. The steam generator weighs 355 tons and is one of the heaviest pieces of equipment at a nuclear plant.

Inside the steam generator, there are 11,000 heat exchange tubes with a total length of about 130km, laid in 105 horizontal rows.

The VVER-TOI design also envisages a new arrangement of steam generators in the containment area, which allows for the placement of longer steam generators with the same internal diameter of the sealed envelope (44 metres).

Steam generators for Kursk -II were manufactured at the Atommash plant in Volgodonsk, a branch of the AEM-technology (part of Rosatom’s mechanical engineering division Atomenergomash). The equipment is transported along the same route as the reactor vessel  - first,1500km by river from the Tsimlyansk reservoir to the city of Semiluki, Voronezh region, and then 300km by special vehicles to the city of Kurchatov. All four steam generators are planned to be delivered to the construction site by the end of 2021.

Photo: The first steam generator has been shipped for the Kursk II-1 VVER-TOI (photo credit: Rosenergoatom)