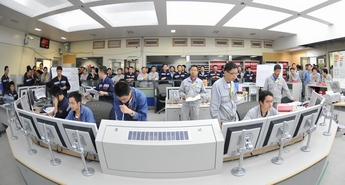 The start up of China’s first domestic CPR-1000 nuclear power plant, unit 1 of Ling Ao Phase II, marks the start of a new era of nuclear power in China. China Guangdong Nuclear Power Company (CGNPC) expects commercial operation of the unit to begin in October 2010, less than five years after first concrete was poured in December 2005.

Ling Ao II, unit 1 was connected to the grid at 3:38pm on 15 July 2010, becoming China’s 12th commercial reactor to generate power. Commissioning is now underway. Ling Ao II, unit 2, under construction at the same site in Guangdong province, is due to begin hot testing and power generation in June 2011.

Most of the design, engineering, equipment manufacturing, construction and technical services for Ling Ao II have been provided by Chinese companies. The equipment localization rate will be more than 50% and 70% for unit 1 and 2, respectively, according to CGNPC.

The CPR-1000 is a Generation II+, 1080MW pressurized water reactor, based on French- three-loop design. Over 60 design improvements have been madeby the Chinese, including modifications to the control room, fuel, and the introduction of half speed turbo generators (supplied by Alstom). However, Areva retains intellectual property rights for the CPR-1000, which constrains overseas sales. To sell abroad the Chinese would need agreement from Areva on a case-by-case basis, which seems unlikely as the CPR-1000 could be in competition with the Areva/MHI Atmea 1 design.

CNGPC says that the operation of Ling Ao phase II will lay the foundation for the development and introduction of third-generation technology.