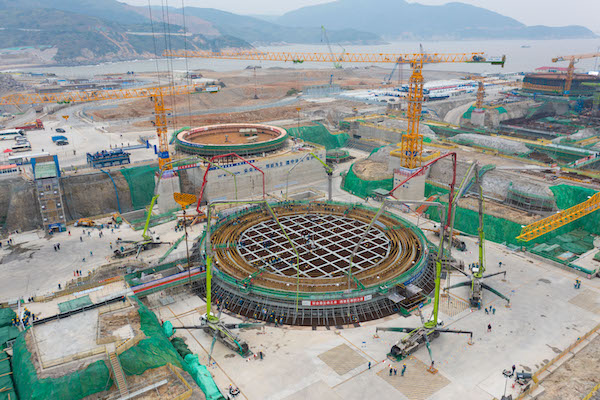 The San'ao plant is China’s first nuclear power project with private equity participation. The project includes plans to build six units with Hualong One reactors. Construction of unit 1 began in December 2020. Once all six units are put into commercial operation, the annual power generation capacity will reach 52.5TWh, which will exceed the annual power consumption of Wenzhou in 2020. It will reduce standard coal consumption by 16.04 million tons and carbon dioxide emissions by 43.36 million tons a year.

"Unit 2 unit of the San'ao Nuclear Power Project is the first nuclear unit to be constructed during the 14th Five-Year Plan period in Zhejiang Province. After it is put into operation, it will deliver a steady stream of clean energy to the Yangtze River Delta region and take the lead in implementing the ‘dual carbon’ goal for Zhejiang Province," said Li Lexiao, Secretary of the Party Committee and General Manager of CGN Cangnan Nuclear Power Company. He added that, in recent years, Cangnan Nuclear Power Company has worked closely with local governments to deeply implement new development concepts and fulfil the social responsibilities of central enterprises. “Many achievements have been made in the construction and improvement of water use, the introduction of related industries, and the co-construction of clean energy demonstration bases, and have continued to contribute to the realisation of common prosperity.”