Energoatom and NuScale Power to explore SMR deployment in Ukraine 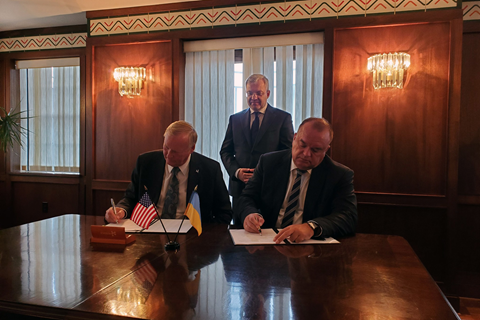 Each fully factory-fabricated NuScale Power Module is capable of generating 77MW of electricity with power plants that can house up to four, six, or 12 individual power modules. In July the US Nuclear Regulatory Commission published a proposed rule that would certify the NuScale design in the USA.

“Energoatom is pleased to establish a cooperation with NuScale Power, a US vendor of small modular reactors," said Petro Kotin, Acting President of NNEGC Energoatom. "We are considering the possibility of building SMRs in Ukraine to replace carbon-emitting thermal power plants and to increase the load following load capacities of the Ukrainian energy system,” he added.

The agreement is "further evidence of growing international interest for NuScale’s small modular reactors and indicative of Ukraine’s desire to find new, innovative sources of clean, reliable, and affordable energy to the country," a NuScale statement said.

Ukraine currently operates fifteen nuclear reactors at four power plant sites, which account for around half of the country's electricity production. Ukraine is also considering deployment of up to five large reactors.

In August, Energoatom and Westinghouse signed an exclusive agreement to bring Westinghouse AP1000 reactors to multiple sites in Ukraine.Completion of unit 4 at the Khmelnitsky nuclear plant has been identified as a pilot project, and in the future the parties are to build four more power AP1000 units at a cost of up to $30bn.