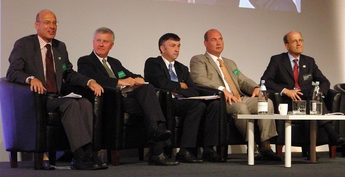 In a packed conference room in west London, EDF executives explained how it is planning to organise the work required to build the four 1650MW PWRs it plans for the UK over the next 15 years. More than 600 people registered to attend the one-day event, which included 10-minute meet-and-greet sessions with some suppliers and EDF procurement staff.

"From here on in, the world will be watching us," said EDF Energy CEO Vincent de Rivaz. "Not just to see whether EDF Energy or its supply chain can deliver what they promise, but to see how well the UK rises to this historic challenge," he said.

EDF is developing Hinkley Point C and Sizewell C roughly in parallel, said Richard Mason, Nuclear New Build director of planning and external affairs, with about 18 months between reactor units. A geological study of Hinkley was finished last year; another is planned for this year, with a study at Sizewell. He added that site preparation work has been helped by British Energy's earlier abortive attempts to build reactors in the 1990s at Hinkley Point and Sizewell. EDF hopes for strategic site assessment approval in 2009, and aims to submit the first site planning application in early 2010. EDF plans to break ground in about a year, although the first concrete pour would not begin until 2013. First electricity generation is planned for 2017.

The Flamanville-3 EPR design will form the template for the new reactors in the UK, although the exterior of the turbine hall and balance of plant buildings will differ from France.

EDF has chosen to play a role of architect-engineer in managing the new-build projects in the France and UK, and potential projects in Italy. It is setting up a new office in London for controlling nuclear new-build licensing and construction. Processes and suppliers developed for the UK would also be shared with the recently-announced EPR, Penly-3, in Penly, France. Development of potential reactors in Italy would also be directed from London.

The men were speaking at EDF Energy's UK suppliers forum. Left to right: Richard Mason, Nuclear New Build director of planning and external affairs; Henri Herkelmann, director of construction, Nuclear New Build; Robert Pays, deputy director, EDF nuclear engineering division; Chris Bakken, director for operations, licencing and safety, Nuclear New Build; Humphrey Cadoux-Hudson, managing director, Nuclear New-Build
At the core of the architect-engineer structure is the nuclear engineering department, abbreviated 'DIN' in French. This department - which employs 4000 people in France - manages the construction and commissioning project, designates codes and standards, and checks that suppliers are meeting codes. EDF has announced that AMEC will support its new UK-based DIN, with support from its corporate purchasing department and its UK subsidiary British Energy. It has not yet decided exactly which codes and standards will be followed - ASME codes from the USA popular in the UK, or European standards more common in France.

As architect-engineer, EDF will not directly manage more than two links in the supply chain. The company plans to delegate key systems - nuclear steam supply system, turbine-generator system and waste treatment - to single suppliers. Areva has won the contract for the nuclear steam supply system for the UK reactors. EDF is looking to parcel out engineering-procurement-construction-style contracts for the turbine island and balance of plant. Although Alstom won the contract for the Flamanville turbine island, and Siemens won the contact for Olkiluoto 3, NEI understands that no deal has been signed for the UK contracts.

"There is a misconception that the NSSS is all of the contract for a nuclear plant," said Humphrey Cadoux-Hudson, EDF Nuclear New-Build managing director. In fact, EDF is planning to award 150 contracts for other parts of the plant, plus site services contracts. Contracts will cover civil engineering, material handling, ventilation, conventional island, other electrical and instrumentation and control work.

EDF executives stressed that qualifying as an EDF supplier would not be easy, but could be very rewarding because of long-term potential export opportunities. "Don't underestimate the amount of planning and development required. But we are here to help," said Henri Herkelmann, director of construction, Nuclear New Build. Cadoux-Hudson said that the four critical supply chain issues were safety, quality assurance, skills and productivity. "Skills are the reason why we are talking with you now rather than 2010-11," he said. "Crucial skills availability will tighten in the next few years; demand will rise in the UK and internationally. The UK has substantial skills, but it needs more."

Above the DIN is EDF's site owner, the licensee, referred to as Nuclear New Build Generating Company. It looks over the entire process and ensures quality assurance. This group would be looking to hire about 1,000 staff in the next few years, according to Chris Bakken, director for operations, licensing and safety. He is responsible for setting up training programmes and facilities, and safety standards in an independent safety asssessment department.

"We have a company policy of zero harm, to the staff, [construction] workforce and to the public," he said. "We will not hesitate to stop work if the core value is not being followed."

How to get on EDF's books

EDF requires all potential suppliers to register on http://portail-achats.edf.com to enter a demanding prequalification phase to be shortlisted for an invitation to tender (generally six months later). Prequalification is currently underway for earthworks and main civil engineering, and mechanical and electrical erection. Existing Areva subcontractors will be allowed to skip prequalification. Those companies who send in a tender will need to separate the technical element from the commercial (cost) element; EDF will only go on to the cost element once it determines that the technical spec is in compliance. Tender selection criteria is either lowest cost or most economically advantageous (on which there will be scored criteria).