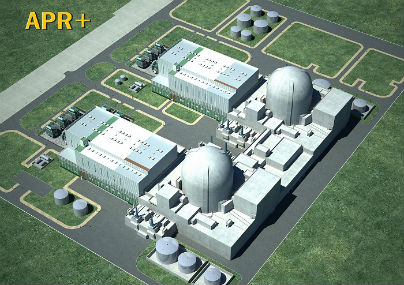 KHNP described the APR+ as its next generation nuclear power plant. It is an evolution of the Korean standard nuclear power plant (OPR1000), which is used at ten of Korea's 23 reactors, and also its latest APR1400 reactor, which is under construction at four sites in Korea and has been exported to United Arab Emirates.

The APR+ offers a number of improvements over its predecessors, including increased electrical output, enhanced safety and shorter construction period, according to KHNP.

The reactor core holds 257 nuclear fuel assemblies, 16 more than in the APR1400 design, contributing to a 10% increase in electricity generation capacity.

The main control room (MCR) and remote shutdown room (RSR) have been redesigned in a way that protects them from external impacts, KHNP says.

Like the APR1400, the APR+ has four independent and physically separated safety trains, in order to protect the nuclear power plant even in unexpected situations such as impact of an aircraft or an outbreak of fire.

Passive hydrogen control systems and watertight doors come as standard in the APR+ design, bringing in post-Fukushima upgrades that have been applied at all Korean nuclear power plants. The design also includes emergency cooling facilities (e.g. a passive auxiliary feedwater system), which make it possible to shut down and cool the power plant without electricity.

Finally, the reactor is expected to have a reduced 36-month construction time, compared with 52 months for the APR1400, thanks to modular construction methods applied in the design.