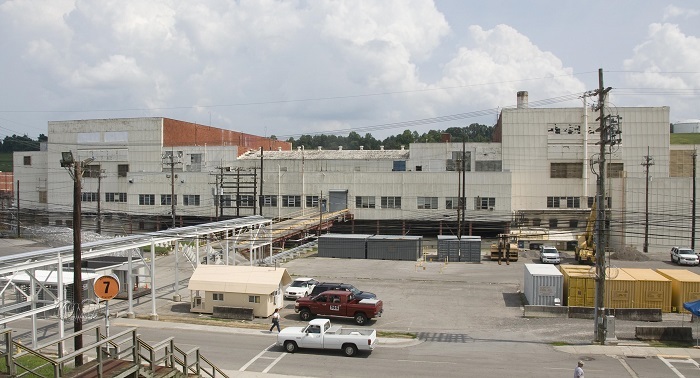 US Department of Energy (DOE) Environmental Management (EM) crews are taking the first steps to bring the massive Alpha-4 facility at the Y-12 National Security Complex (Y-12) to the cold-and-dark stage, a process that involves removing all utility sources to the building as a precursor to demolition. Alpha-4 is one of the largest high-risk buildings at the site. It is the third former enrichment facility at Y-12 where EM has initiated deactivation work. Other crews are preparing the Alpha-2 and Beta-1 facilities for teardown.

“Our close integration with Y-12 and its prime contractor, Consolidated Nuclear Security, coupled with integrating our deactivation and demolition work across the entire Oak Ridge Reservation is key to keeping our work moving forward,” said Dan Macias, UCOR’s site integration and clean-up manager. “Our workforce’s commitment to doing this work in the safest possible way helps us ensure we meet DOE’s expectations to reduce risk and support Y-12’s ability to advance their national security mission.”

The four-story Alpha-4 spans more than 500,000 square feet across 13 acres of land. The deactivation and demolition project is challenging not only due to the facility’s size, but also its mercury contamination.

The facility was used for uranium separation from 1944 to 1945. A decade later, workers finished installing Column Exchange (COLEX) equipment on the west, east, and south sides of Alpha-4 for lithium separation, a process requiring large amounts of mercury. A significant amount of mercury was lost into the equipment, building and surrounding soils during those operations. Mercury clean-up is one of EM’s top priorities at Y-12.

Although employees drained the majority of materials from the equipment at Alpha-4 when operations ended in the 1960s, recoverable amounts of mercury remained in ageing lines and equipment that had rusted and deteriorated over the decades.

Two other pivotal projects are underway that will enable removal of Alpha-4. The first is construction of the Mercury Treatment Facility. The facility will capture and treat mercury releases entering a nearby creek caused by crews and big machinery tearing down Alpha-4 and other large, mercury-contaminated buildings in the area.

Other critical work is the National Nuclear Security Administration’s West End Protected Area Reduction Project. This aims to reroute portions of the high-security area at Y-12 around Alpha-4 and the other mercury-contaminated buildings, allowing enhanced access for cleanup crews and significantly reducing clean-up costs. Deactivation work at Alpha-4 is expected to continue for several years.

Image: The 500,000 square-foot Alpha-4 facility in Oak Ridge (courtesy of US DOE Office of Environmental Management)