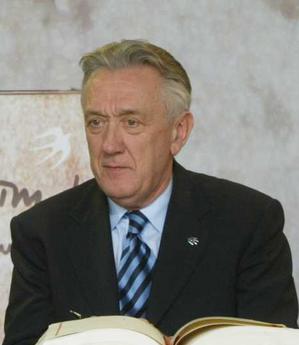 The European Commission (EC) has put forward revised drafts of two items of European Union (EU) legislation on the safety of nuclear installations and radioactive waste management (the main directives comprising the so-called ‘nuclear package’). In the new versions, adopted on 8 September, the EC believes it has “taken account of the comments expressed by the European Parliament and the European Council but has preserved the initial objective of the two texts.”

Speaking at the World Nuclear Association Symposium in September, Loyola de Palacio, EC vice president responsible for energy and transport, said: “In brief, the revised nuclear safety directive proposal defines basic obligations, general principles, and a system of a review by a committee of national safety authority representatives with the Commission acting as a secretariat, and this system should now apply community-wide for the EU-25 with community-binding rules and principles. The objectives of the second revised proposal are to bind member states to define and to adopt national programmes including deadlines for the safe management of spent nuclear fuel and radioactive waste, to encourage cooperation between member states and to reinforce research and technological development in this field. The creation of deep geological repositories as a preferred solution has been maintained in our new proposals only as a long-term option to be studied.”

De Palacio then called for the European Council of Ministers to adopt the proposals: “I now strongly hope that these directives be adopted soon by the Council of Ministers, considering that the revised proposals are meeting nearly all of the main concerns stressed during the last two years, while at the same time maintaining the fundamental aim. This aim is to reassure the public at large that nuclear energy developed or operated in the future will meet the same high level of safety on the entire territory of the enlarged EU.”

A PASSAGE TO NOWHERE

The passage of the ‘nuclear package’ of directives has been far from smooth since they were first proposed by the EC on 6 November 2002. The main proposals were entitled:

• Setting out basic obligations and general principles on the safety of nuclear installations.

• On the management of spent nuclear fuel and radioactive waste.

The EC took Chapter 3 of the Euratom Treaty, which concerns health protection, as the legal justification for introducing the directives. This requires – under Article 31 – obtaining the opinion of an expert group, prior to the formal adoption by the Commission. The November 2002 draft directives were formally adopted on 30 January 2003, following the opinion from the Article 31 expert group.

On 13 May 2004, the meeting of the Committee of Permanent European Union Representatives (Coreper) failed to reach an agreement on the proposals. Faced with a ‘blocking minority’ consisting of the UK, Germany, Finland and Sweden, Coreper decided not to vote on the matter. This effectively killed off the original nuclear package, which was later relegated in June to a series of ‘conclusions’ (policy statements) drawn up by the Council’s Atomic Questions Group and adopted by the Council before the conclusion of the Irish presidency of the EC.

What then are the main differences between ‘Nuclear Package Mark I’ (the 30 January 2003 directive) and its latest incarnation (‘Mark II’, 8 September 2004)?

According to the EC: “In the new versions, the Commission has taken account of the comments expressed by the European Parliament and the Council but has preserved the initial objective of the two texts.”

The first difference of any note to the ‘Mark I’ safety directive is the removal (in Article 9 – financial resources) of paragraphs stipulating that member states ensure that adequate decommissioning funds are available when required. The annex to this article concerning the management of decommissioning funds is also removed. Article 9 in Nuclear Package Mark II simply reads: “Member states shall take the appropriate steps to ensure that adequate financial resources are available from the regulatory body and the operators to support the safety of nuclear installations throughout their life.”

The curious, and perhaps somewhat confusing, phrase “from the regulatory body and the operators” did not exist in Mark I.

One of the main sticking points in Mark I was the first sentence of Article 12: “In order to ensure the maintenance of a high level of nuclear safety in member states, the Commission shall carry out verifications of safety authorities.” In Mark II, Article 12 establishes a committee of regulatory authorities composed of representatives from each member state, with the Commission acting as secretariat.

The first change of any significance to the directive on the management of spent nuclear fuel and radioactive waste is that Mark II now states: “Member states shall study the possibility to give priority to the solution of deep geological disposal, taking due account of their specific circumstances.”

In addition, the apparently arbitrary timetable for the authorisation of waste repositories no longer exists in Mark II. Now, according to Article 5: “The national management programme shall include the timetable chosen for the long-term management of radioactive waste.” If a member state concludes there is no suitable alternative to disposal, a timetable for a disposal facility must be drawn up.

Finally, the Mark II waste directive requires the setting up of a ‘committee of experts’ comprising representatives from each member state, and with the Commission acting as the secretariat.

Clearly, there are a few changes of note in Mark II. But will these be enough to satisfy critics?

It is first of all worth noting that some of the major changes described above – such as the disposal facility timetable in the waste directive and the removal of the annex on decommissioning funding in the safety directive – had already been removed by the Council. According to independent consultant Antony Froggatt, there is in fact very little difference from the last Council version of the directives. He told NEI that he was “unsure why the Commission thinks that this will be adopted when the Council version wasn’t adopted.”

Then there is the point made by some that the original proposals on safety were simply not necessary. For example, Laurence Williams, director of nuclear safety at the UK’s Nuclear Installations Inspectorate and chair of an IAEA group of regulators, told a press conference last year that the IAEA was producing a comprehensive set of safety standards. “If every country was to comply with the IAEA standards, then that would be harmonisation of safety,” he said. He added that all European Union countries had already signed the IAEA’s 1994 Convention on Nuclear Safety. Short of completely scrapping the safety directive, it is hard to see how Williams’ point can be effectively addressed by any changes, however significant.

The waste directive is perhaps less controversial than the nuclear safety directive. A recent commentary by the Association for Regional and International Underground Storage (Arius) noted: “In retrospect, the waste directive may well have had an easier passage, had it not been coupled to the nuclear safety directive.” But Arius also acknowledged that there are significant differences of opinion on how and when to move forward on radioactive waste management.

Although Nuclear Package Mark II does not impose a timetable for a disposal facility, some member states will not warm to the idea of setting their own timetable. As Froggatt pointed out in a briefing on the ‘nuclear package’ earlier this year, a fixed timetable could decrease the likelihood that an unsuitable candidate site or design will be abandoned late in the site investigation phase. Furthermore, “communities close to the proposed site may consequently have increased concerns over the processes and the balanced nature of the consultation process.”

Economic aspects also come into the equation. On this point, Arius stated: “Postponing implementation of a geological repository is financially attractive, given present discounting practices. The attraction of postponement is further enhanced if it delays the controversial task of nominating final disposal sites.”

Not only is it likely that there will be turbulent times ahead for the ‘nuclear package’; the proposals will have also to struggle on without their principal standard bearer. De Palacio is about to relinquish her position, leaving Hungary’s current foreign minister László Kovács to continue from 1 November where she left off.

In answers to a European Parliament questionnaire ahead of his assuming office, Kovács was asked what his approach was to the directives and to concluding the legislative process. He said: “A Community regulatory framework would increase transparency regarding nuclear energy and thereby improve public perception of this energy source.”

Regarding safety: “Due to the significant difference in nuclear technologies used by different member states, it is not yet possible to fix harmonised detailed safety standards applicable to all existing plants.” But then he went on to say that the safety directive should be pushed: “The current legislative process in the Council has been supported by a majority of member states but they do not yet form a qualified majority. As regards the minority, we need to discuss with them their objections to accept binding European legislation in the area of nuclear safety.”

Regarding radioactive waste management, Kovács said: “If any new nuclear installation is established, it must be accompanied by clear and complete plans outlining how to dispose of all forms of this waste.” He added: “It is inevitable [sic] that member states make considerable progress in this area, fully involving the public in the process. I would like to emphasise that the objective is not to facilitate dumping waste outside our borders but to find a solution for both short and long term which is acceptable to the public.”

In conclusion, he said: “The adoption of the proposed legislation will allow the Commission to continue to use fully and in a more consistent and responsible manner the powers conferred on it under the Euratom Treaty.”