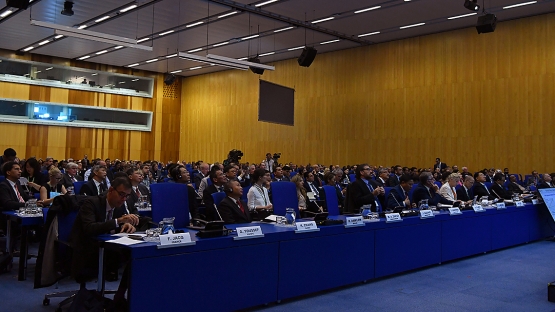 The International Atomic Energy Agency’s (IAEA’s) five-day International Conference on Climate Change and the Role of Nuclear Power, which ended in Vienna on 11 October, reflected a widespread acknowledgment that cost continues to be a major obstacle to the wider use of nuclear power, but also revealed a growing optimism about the potential role of small modular reactors (SMRs) and advanced modular reactors (AMRs).

A handful of new nuclear projects in Europe and the USA have suffered high profile construction delays and cost overruns, prompting criticism that low carbon nuclear power will struggle to help fight climate change. Yet in many countries, new nuclear power projects are being delivered mostly on time and budget, including in Belarus, China, Korea and Russia. Their success echoes the experience of nuclear power construction in decades past when its rapid deployment largely decarbonised electricity production in countries like France and Sweden, conference speakers noted.

“The vast majority of new-build projects around the world are delivering very low cost, successful nuclear programmes, achieved through repeat builds, a programmatic approach, and building up skills and capabilities within the supply chain, labour force and project leadership team,” said Kirsty Gogan, co-founder and Executive Director of Energy for Humanity, a non-profit focused on solving climate change via access to modern energy services. “That’s actually what will drive down the cost.”

According to data compiled by the IAEA on the 61 new power reactors connected to the grid over the last decade, units in the Far East were built almost twice as fast as those in Europe, taking on average 66 months compared with 110 months (excluding a few projects delayed for political and non-technological reasons). Those new builds that have gone over budget and schedule are all first-of-a-kind, first-in-a-generation projects, Gogan said. “There isn’t the experience within the project leadership teams, supply chain or labour force, and those designs are being licensed for the first time by regulators that haven’t really gained real life experience of licensing plants for a generation.” Achieving cost reduction will require significant, internal transformation of the nuclear industry and this must be supported by public policy and continuing RD&D, she noted. Cost reduction will not address all the barriers to global nuclear energy expansion, “but will make nuclear a far more viable option for decarbonisation, and as a result, our decarbonisation efforts significantly more efficient”.

For many financial institutions today, nuclear power does not qualify for financing under green or sustainable financing mechanisms. Furthermore, many markets do not price CO2 emissions, to the detriment of low carbon nuclear. Unless this changes the economics of deploying new reactors in deregulated markets will remain challenging, speakers said, indicating the need for some government intervention.

Hal Turton from the IAEA Planning and Economic Studies Section said that compared with current trends, more conducive market and policy conditions are needed to unlock nuclear power’s mitigation potential. Several countries plan to utilise nuclear power for climate change mitigation in their Nationally Determined Contributions (NDCs) under the Paris Agreement. However, he said in his presentation, it is widely acknowledged that plans in NDCs are not sufficient to meet the ultimate goal of limiting the increase in average global temperature to well below 2 °C, let alone to 1.5 °C. In the vast majority of scenario studies, an effective response to climate change includes an increased role for nuclear power. Consequently, a policy and market environment that unlocks the mitigation potential of nuclear power can underpin the adoption of more ambitious NDC targets to achieve the goals of the Paris Agreement.

Dr Natalia Davydova representing Russian NGO “Environmental Projects Consulting Institute”, noted that the required 50% reduction in anthropogenic per capita GHG emissions can be achieved if the following structure of global energy balance is reached by 2050s: a 40% share of traditional generation of electricity from fossil fuels; a 40% share of basic nuclear energy stations; and a 20% share of solar, wind and small hydro-power plants serving predominantly local and off-grid customers. An increase in the percentage of nuclear energy to 40% of the world energy balance will require installation of 2300GW of nuclear power generation capacities, she said. This would secure the attainment of climate-justified reductions of GHG emissions and attract about $7.5-8 trillion of investments for the development of nuclear energy by the turn of the Century. This amount of investments is equivalent to 10% of current global GDP. She added that the required reductions of carbon intensity of electricity generation are possible if currently available nuclear power technologies are transferred to developing countries with the highest rates of GDP growth.

Driving down costs: are SMRs the solution?

Jessica Lovering, a former Director of Energy at US-based non-profit organisation the Breakthrough Institute, said the key to bringing down construction costs and times is to achieve high learning rates by repeating projects using standardised designs. The industry needs to move away from being largely focused on massive one-off projects, she added, noting that the deployment of small, medium sized or modular reactors (SMRs) will shift the industry’s approach.

Tony Roulstone of Cambridge University in the UK said that for reasons of cost and funding, nuclear power is not currently a preferred means of tackling Climate Change. There are at least two available approaches that would allow nuclear to become competitive with other low-carbon energy sources. If adopted quickly, they would allow nuclear energy to be a substantial contributor to Climate Change at scale but this will be possible only with Government involvement to guarantee construction funding; and support collaborative design and development of modular and advanced reactors. Future R&D for nuclear should focus two main task: turning modern construction approaches for SMRs into practical solutions; and evaluating how AMRs can be developed and deployed before 2050.

Elina Teplinsky from law firm Pillsbury Winthrop Shaw Pittman said it is becoming increasingly clear that, while development finance institutions (DFIs) traditionally refuse to finance nuclear projects, the same reasoning does not apply to SMRs. These are fundamentally different from large plants, and in the context of developing economies can play a crucial role in allowing the attainment of developmental goals. “However, public financing is critical for developing world energy projects. For this revolutionary technology to be brought online, DFIs must reconsider their anti-nuclear stance and provide financing for SMRs alongside other low carbon sources.”

José Reyes, co-founder of NuScale Power and co-designer of the NuScale passively-cooled small nuclear reactor, discussed the capability of the existing nuclear fleet and the NuScale SMR to adapt to extreme events caused by climate change. He introduced the concept of NPPs as “first responder power”, a new level of functionality of significant value to the next generation of nuclear power for climate adaptation. He also presented the results of a study on the role of the NuScale SMR in providing long-term power to mission critical facility micro-grids (e.g., hospitals, data centres, military bases) following a catastrophic loss of transportation and transmission infrastructure. If a catastrophic event damages both the transmission grid and transportation infrastructure such that neither fuel nor power cannot be delivered to the site for a prolonged period of time, “the multi-module NuScale plant operating in island mode has a significant advantage”, he said. If the micro-grid remains intact or can be restored, a 12-module plant can provide 120MWe to the micro-grid of a mission critical facility for 12 years without delivering new fuel to the site.

Gu Jun from China National Nuclear corporation (CNNC) said nuclear energy is irreplaceable in terms of combatting climate change, and emphasised three points. First, governments and the global nuclear community should strengthen confidence and maintain the momentum and stable investments for nuclear power development, so that nuclear energy can contribute more to tackling climate change. Second, continuous innovation is needed to resolve the bottlenecks of nuclear energy development. “In order to improve the economy and competitiveness of nuclear power, we need to take effective measures, learn from feedbacks, upgrade technology and management, optimise system design, reduce the cost of key equipment and shorten the construction time.” Safety management must also be improved. Third, all-round cooperation is needed to address common challenges. International technology cooperation is becoming ever more important to optimise and upgrade nuclear energy technology to make it safer and more competitive. “Climate change is a global challenge, he said. “But the challenge may be an opportunity to create a new era of nuclear energy development.”