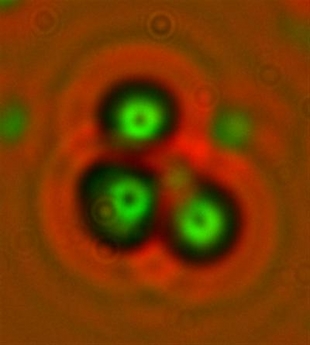 There is compelling new scientific evidence for the existence of low-energy nuclear reactions (LENR) according to one group of scientists. Once called “cold fusion” this process may promise a new source of energy.

The group of scientists say they have discovered visual evidence that LENR devices can produce neutrons – the tell-tale signs that nuclear reactions are occurring. Analytical chemist Pamela Mosier-Boss of the US Navy’s Space and Naval Warfare Systems Center (SPAWAR) is co-author of a new study, presented at the American Chemical Society’s 237th National Meeting on 23 March.

In the study Mosier-Boss and colleagues revealed how they inserted an electrode composed of nickel or gold wire into a solution of palladium chloride mixed with deuterium in a process called co-deposition.

Researchers passed electric current through the solution, causing a reaction within seconds. The scientists then used a special plastic, CR-39, to capture and track any high-energy particles that may have been emitted during reactions, including any neutrons emitted during the fusion of deuterium atoms.

At the end of the experiment, they examined the plastic with a microscope and discovered patterns of “triple tracks,” tiny-clusters of three adjacent pits that appear to split apart from a single point. The researchers say that the track marks were made by subatomic particles released when neutrons smashed into the plastic. Importantly, Mosier-Boss and colleagues believe that the neutrons originated in nuclear reactions, perhaps from fusing deuterium nuclei.

They cited other evidence for nuclear reactions including x-rays, tritium, and excess heat. Meanwhile, the team of scientist are continuing to explore the phenomenon to get a better understanding of exactly how LENR works, which is key to being able to control it for practical purposes.

"To our knowledge, this is the first scientific report of the production of highly energetic neutrons from an LENR device," Mosier-Boss said.

The first report on "cold fusion," presented in 1989 by Martin Fleishmann and Stanley Pons, was a global scientific sensation. They claimed that nuclear fusion could be achieved at comparatively "cold" room temperatures — in a simple electrolytic cell. However as other scientists could not reproduce their results, the field of research declined.

Other areas of fusion research have continued, however, with the international Iter project and a number of laser driven fusion experiments due to start over the next few years. The National Ignition Facility (NIF) at the Lawrence Livermore National Laboratory in California was completed at the end of February with all 192 beams successfully fired into the target chamber. Initial attempts at achieving laser-driven fusion at NIF are planned to begin in 2010.