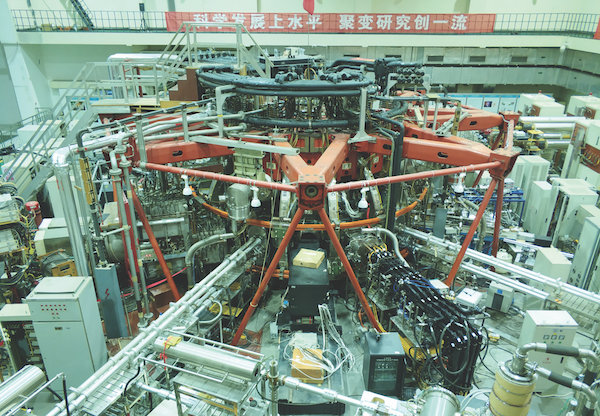 China has completed the construction of the HL-2M tokamak fusion reactor at a research centre in Chengdu, the capital city of southwest China’s Sichuan province.

The tokamak will become operational in 2020, Xinhua reported on 27 November, noting that installation work has gone smoothly since the delivery of the coil system in June. The new apparatus, with a more advanced structure and control mode, is expected to generate plasmas hotter than 200 million degrees Celsius, said Duan Xuru, head of the Southwestern Institute of Physics (SWIP) under the China National Nuclear Corporation (CNNC). China has already spent close to a billion dollars on the project. The facility will provide key technical support for China's participation in the International Thermonuclear Experimental Reactor (Iter) project, as well as the self-designing and building of fusion reactors, he noted.  China is a member of Iter, under construction in France, along with the European Union, the US, India, Japan, South Korea and Russia.

HL-2M, built by SWIP is an upgrade of China’s previous model, the HL-2A – one of three major domestic tokamaks now in operation in China. The other two are the EAST machine at the Institutes of Physical Science, Chinese Academy of Sciences (ASIPP) in Hefei  and J-TEXT at the Huazhong University of Science and Technology (HUST). China started nuclear fusion research in the 1960s and included construction of the HL-1 (upgrade HL-1M) in SWIP and other small tokamaks such as the KT-5 in the University of Sciences and Technology of China (USTC) and the upgraded CT-6B at the Institute of Physics of the Chinese Academy of Sciences (IP CAS) in Beijing as well as the first domestic superconducting tokamak, the medium sized tokamak HT-7 at ASIPP.

These have all paved the way for the China Fusion Engineering Testing Reactor (CFETR), the preliminary conceptual design of which was finished in 2015 and engineering design started in 2017. CFETR is intended for steady-state operation, as well as tritium self-sustainment. In phase one it should have 200MW fusion power and in phase two it should have power of 1GW. It aims to bridge the fusion experiments between Iter and DEMO - the proposed nuclear fusion power station expected to build upon Iter. DEMO is seen as the next step towards a "first of a kind" commercial station. CFETR aims to provide DEMO validation.

Photo: The HL-2A while it was being upgraded to HL-2M (Credit: Institute of Plasma Physics)